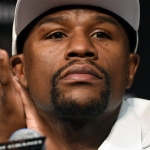 Celebrity gossip site, TMZ, is reporting that five-division world champ Floyd Mayweather was a first hand witness to Monday's murder-suicide of rapper Earl Hayes and Hayes' wife, VH1 star Stephanie Moseley. According to TMZ's sources, Mayweather was talking with an enraged, gun-toting Hayes on FaceTime, urging his friend to not do anything drastic after hearing that his wife … END_OF_DOCUMENT_TOKEN_TO_BE_REPLACED