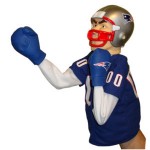 by Fox Doucette Are you ready for some football? Last night, the New York Giants and Dallas Cowboys kicked off the NFL season in the United States with a contest on prime time television for a cheering nationwide throng who, unless they're truly rabid baseball fans, were starved for sports ever since the NBA Finals wrapped up two months ago. Meanwhile, one of the golden … END_OF_DOCUMENT_TOKEN_TO_BE_REPLACED