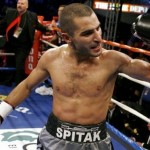 5/30 - Francesco Pianeta (29-1-1, 16 KO’s) vs. Mickael Vieira (14-3-1, 7 KO’s) - Energie Verbund-Arena, Dresden, Sachsen, Germany In his second contest back since Wlad stopped him a year ago, Pianeta looks to add to his German International heavyweight title when he faces Vieira, who makes his 12 round debut, for the vacant WBO European heavyweight title. In December he … END_OF_DOCUMENT_TOKEN_TO_BE_REPLACED