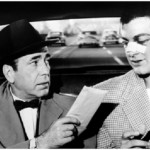 The Set-Up (1949) is based on a poem by Joseph Monsure March, is shot in real time (72 uninterrupted amazing minutes), and is a classic example of film noir. It’s a totally absorbing movie considered by many to be one of the most realistic and gripping boxing films ever made. However, another film that resonates with boxing aficionados is The Harder They Fall … END_OF_DOCUMENT_TOKEN_TO_BE_REPLACED