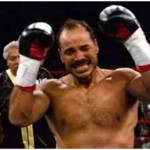 Ayala vs. Epps (August 1982) "He could have been one of the greatest."— Osmar Alaniz, boxing coach and friend of the family On March 28, 1981, Mario Maldonado (11-7-1 coming in) met vicious and highly touted Tony “El Torito” Ayala Jr. (8-0, 7 KOs at the time) at the Carrier Dome in Syracuse. Ayala’s aggressive fighting style earned him the nickname” El Torito,” the … END_OF_DOCUMENT_TOKEN_TO_BE_REPLACED