When Stephen Ormond (17-1, 8 KO’s) and Terry Flanagan (26-0, 10 KO’s) face off Saturday night at the Civic Hall in Wolverhampton, U.K., the two will be fighting for Ormond’s WBO European lightweight title.  Also on the line however, will be an opportunity to fight for the WBO world lightweight championship. It’s expected that current lightweight champion Terence … END_OF_DOCUMENT_TOKEN_TO_BE_REPLACED 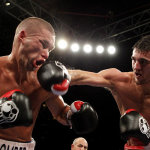 According to promoter Eddie Hearn, the rematch between rivals Nathan Cleverly (28-1, 14 KO’s) and Tony Bellew (22-2-1, 14 KO’s) is nearly finalized. In what Sky Sports is calling “the most highly-anticipated domestic battles of recent years”, the two former light heavyweight title holders, now both fighting as cruiserweights, will square off again before years end. According … END_OF_DOCUMENT_TOKEN_TO_BE_REPLACED

Undefeated UK middleweight Anthony Ogogo (7-0, 4 KO's) has undergone surgery to relieve chronic Achilles pain in both of his tendons. The 2012 British Olympic bronze medalist has battled this ailment since 2010, originally noticing his condition during the Commonwealth Games in India. The pain worsened over time and became so bad that during the Olympic Games he was unable … END_OF_DOCUMENT_TOKEN_TO_BE_REPLACED 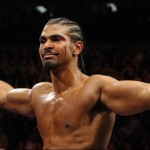 Last July, David Haye talked himself into what many believed to be the most important heavyweight fight in over a decade. After tormenting both Klitschko brothers for years through verbal assaults and t-shirt tirades, the former cruiserweight champion of the world finally got one of them inside the ring . David Haye versus Wladimir Klitschko was what everybody wanted. The … END_OF_DOCUMENT_TOKEN_TO_BE_REPLACED

In a thrilling brawl in Belfast, Northern Ireland, Belfast cabbie and defending British Commonwealth Champ, Martin Rogan, was stopped in 8 by Sam Sexton.Sexton managed to stun the onrushing Rogan several times, most notably in the 2nd and 7th, but what ultimately did in the defending champs was a swollen-shut left eye, which eventually led to the ringside doctor calling an end … END_OF_DOCUMENT_TOKEN_TO_BE_REPLACED