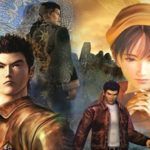 November 1986, Japan. Ryo Hazuki became an unwitting witness of the incident, which resulted in the death of his father. The killer disappeared into the sunset with bodyguards, taking with him the mysterious Dragon Mirror. What kind of mirror? What has happened? How terrible would be the revenge? So began one of the greatest gaming stories in history. In December 1999, the … END_OF_DOCUMENT_TOKEN_TO_BE_REPLACED