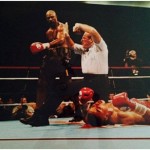 When boxing fans think of the most spectacular knockout they have ever seen, the Vonda Ward vs. Ann Wolfe fight is likely to get mentioned most often. That fight occurred on May 8, 2004 in Biloxi, Miss. At stake were the vacant IBA female light heavyweight title and the Women’s International Boxing Association World light-heavyweight title. In short, it was an important … END_OF_DOCUMENT_TOKEN_TO_BE_REPLACED