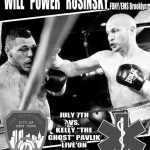 by Jim McGrady Just 24 hours removed from his last bout, Will Rosinsky received, as he put it,  “the opportunity of a lifetime”.  On July 7th, the super middleweight from Ozone Park, Queens will get another shot in the national spotlight against former middleweight world champion, Kelly Pavlik on HBO’s “Boxing After Dark”. Rosinsky was last seen nationally on Showtime’s … END_OF_DOCUMENT_TOKEN_TO_BE_REPLACED