What has arguably been the best year in the 13-year history of ESPN’s Friday Night Fights series wraps up this week with an overhyped prospect meeting his first true test as a professional and a genuine prospect trying to show the world he’s ready for a title shot as Demetrius Andrade (13-0, 9 KOs) faces Grady Brewer (28-12, 16 KOs) at junior middleweight and Henry “Hammerin’ Hank” Lundy (20-1-1, 10 KOs) takes on former WBC lightweight champ David Diaz (36-3-1, 17 KOs) in a co-feature that could be the main event on just about any other night.

Andrade has taken a lot of flak from this writer over the past few months, but for all those calling for him to face a 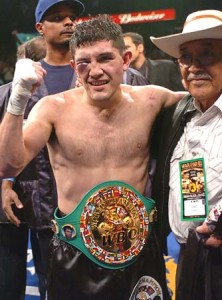 legitimate opponent to prove himself, it is hard to imagine a better challenge than Brewer. Against undefeated prospect Fernando Guerrero two months ago, Brewer came out putting pressure on the then-unbeaten Maryland native, finally doing him in midway through the fourth round. Some would argue that Brewer’s KO win was made possible by holding Guerrero behind the head when he connected with the hook that hurt his opponent and led ultimately to the stoppage; if this is the case, then Andrade may have less to fear than it initially seems. However, make no mistake about it; this is by a very large margin the best opponent Andrade has faced so far. If he wins, the narrative of his career will go from “fringe prospect who never fights anyone” to “fringe contender who may be only a couple of wins away from a title shot”.

Hank Lundy is either a constant source of entertainment or a thorn in the side of a fight fan. Unafraid to talk a big game, genuinely convinced in his own mind that his TKO loss against John Molina on FNF last year was a function of a quick-hook referee rather than Molina’s power (and Lundy may have a point; he was way ahead on the scorecards at the time of the stoppage), and without a hint of trepidation on fight night, Lundy gets to put his money where his mouth is in the co-feature. A win could position him as a major player in the “best lightweight not named Juan Manuel Marquez” sweepstakes as 2011 fades into 2012.

Opposing Lundy is a guy who one could easily dismiss as having beaten an on-the-downside-of-his-career Erik Morales in 2007, except for the fact that Morales is back with a vengeance making Diaz’s victory for the WBC lightweight title look better by the day. David Diaz’s last fight was a majority decision win over journeyman Rob Frankel (last seen splattering blood around the ring like a Jackson Pollock painting against John Molina on FNF) in January of this year. Diaz also has on his curriculum vitae a TKO loss to Manny Pacquiao in 2008 in which he surrendered that title he had won from Morales.

As important as this co-feature is for Lundy to stake his claim as a rising star at 135 pounds, so too is this a critical juncture in David Diaz’s career; lose here and he is effectively finished as a serious contender, but a win could put him right back in the mix for another shot at a belt.

ESPN2 has been bringing the goods all year long, and what a way to go out; this Friday’s card, airing on ESPN2, ESPN3.com, and in Spanish on ESPN Deportes at 9 PM Eastern/6 PM Pacific, is absolutely not to be missed. The Worldwide Leader may very well have saved the best for last.

Fox Doucette covers Friday Night Fights for The Boxing Tribune. His column, The Southpaw, appears on Thursdays. Fan mail, hate mail, and offers to star in “Blowhard Columnist: The Musical” can be sent to beatcap@gmail.com.