In 2003, Vitali Klitschko sat on his stool across the ring from one of the greatest heavyweight champions of all time.  The blood gushing from the cuts raked over his left eye were nothing compared to the bloodlust showing in his eyes as he readied himself to continue his punishing onslaught against reigning heavyweight champion Lennox Lewis.

He would never get the chance.

After battering Lewis for 6 rounds, the fight was stopped.  Vitali had beaten Lennox to the punch all 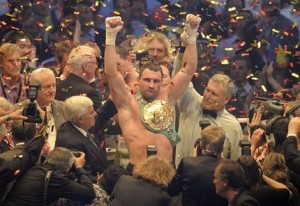 night.  He had out jabbed him consistently.  He had outworked him in close.  He repeatedly busted Lewis up with jarring blows from all angles.  He was up on all three of the judges scorecards, and there were times in the fight that the HBO announcers questioned whether Lewis would make it to the end of the round much less the fight.

In the end, though, Lennox Lewis had escaped the beating of his life to win by TKO in 6, and instead of offering Klitscho a rematch, Lennox Lewis would almost immediately retire.

No matter.  The world knew who the best heavyweight in the world was now.  It was Vitali Klitschko.

Klitschko made it official less than a year later when he demolished the hard-hitting Corrie Sanders in 8 one-sided rounds.  Where younger brother Wladimir had been blown out by the fast-handed Sanders, Klitschko proved his mettle by willingly eating heavy shots to give his even heavier blows back.

By the end of the year, Klitschko had decimated Kirk Johnson and Mike Tyson conqueror Danny Williams.  He now prepared himself for a showdown with former heavyweight champion Hasim Rahman.  It was sure to be a title reign solidifying win for Vitali, but the fight would never take place.

On November 9, 2005 Vitali Klitsckho suddenly announced his retirement due to mounting injuries.

The heavyweight division would not soon fill the void.  In fact, it would be four more years until a legit heavyweight champion would be crowned (Wladimir Klitsckho) and even then fans were left to wonder if it was the right Klitschko.

Sure, younger brother Wladimir did an admirable job of collecting title belts and becoming the clear cut champion of the division, but there was just something missing in the younger Klitschko’s victories.

It wasn’t the knockouts.  He had plenty of those.  It wasn’t the dominance.  He had that, too.   It was the mean steak, the toughness — the bloodlust.  Perhaps there is no greater evidence of this than how the brothers’ fared against fellow opponent Samuel Peter.

Vitali Klitsckho returned in 2008 to take on Peter.  While Wladimir Klitschko had won a unanimous decision victory in 2005 over the fighter billed as the “Nigerian Nightmare”, he had been knocked down 3 times in the fight and was forced to make the bout the kind of “jab-jab-hold” affair fights fans abhor.

It would not be that way for Vitali.  Against Peter, his first fight coming out of retirement, Klitschko pounded the Nigerian until it became such a nightmare for Peter that he quit on his stool.

Since then, Wladimir Klitschko has kept winning.  He truly deserves to be called the heavyweight champion of the world.  Make no mistake: Wladimir Klitsckho is a worthy, historically great champion.   But so is big brother Vitali.  And Vitali does it in a fashion that makes people want to watch him fight.

Since coming out of retirement, Vitali Klitsckho has won 7 fights in a row to run his overall record to 42-2 , but it could very well be 44-0 if not for circumstance.  His first “loss” was against former titlist Chris Byrd in 2000 when Klitsckho, well ahead on all scorecards quite comfortably, was forced to retire because of a shoulder injury.

His other loss, of course, was that fateful night when he basically sent Lennox Lewis into retirement.

Vitali Klitschko is 40 years old now.  His best years in the ring are obviously behind him.  Yet still, when he enters the ring this Saturday against Tomas Adamek as the reigning WBC belt holder, one can’t help but believe that Vitali Klitsckho may still very well be the best heavyweight in the world.