When we left off last week, I talked about how to avoid getting hit and how to hit back. But all of last week’s lesson assumed that your actions existed in a vacuum and that your opponent was doing nothing to adjust his strategy on 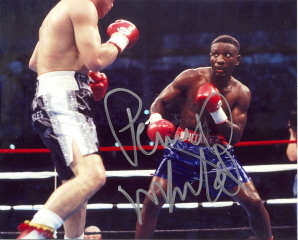 the fly—he just kept coming forward, walking into your brilliant counter-punches until you knocked him out. That may work in video games. It certainly works against limited, punchless opposition, which is how talented but raw fighters go on ESPN with 18-0 records only to get pimp-slapped by Teddy Atlas about how that 24-5 guy who is about to knock them out has “fought for a world title and been in with a much better level of opposition.” Clearly something more is needed in the toolkit in order to go from a prospect talking about how he’s a real fighter now that he’s taken a loss to being Floyd Mayweather or Rocky Marciano and boasting of an unbeaten record against the best fighters in the world.

There was an old Bugs Bunny cartoon (“Rabbit Punch”) where Bugs turned to the camera, broke the fourth wall, and said “I’ll feint him out of position.” He then fainted (in the literal sense) and when the champ stood over him looking confused, up came two fists and the champ was black-eyed and seeing stars in the corner (where the referee was in all this, the world will never know.)

Obviously you don’t want to fall down in a real fight, but the feint is a powerful tool for baiting an opponent into opening himself up to be hit. A half-jab (laying the hand out without committing the body) or creating the appearance of loading up with the trailing hand while not shifting your weight, if done right, will invite the opponent to throw the appropriate counter or make the appropriate move. The line between weaving a cross and ducking smack into a hook is so often decided by whether the cross was genuine or a feint. If the opponent’s guard is a little wide, that blocking motion the opponent just made to parry a jab is naught but a signed death warrant once the uppercut comes in behind it and lands right on the chin.

The key thing to remember here is that if you are going to feint your opponent out of position, you have to do something behind it or the other guy won’t respect that would-be punch coming at him. Worse yet, a defensive-minded opponent may go for the feint but you the fighter aren’t throwing, so the crowd is “treated” to a pantomime show when they came for a slugfest. It’s hard to say which is worse, since an opponent who won’t respect a feint, you can always switch up your strategy and pop a few jabs in his mug to change the tone of the contest at risk of getting countered. But get a reputation as a boring fighter and you could be a world-beater but nobody will ever want to watch you on television or buy your pay-per-view shows, which can end a career as surely as getting repeatedly clubbed in the head for 12 rounds Shannon Briggs-style by a Vitali Klitschko right hand.

So what to do if your opponent is making with the shadowboxing in front of you without properly committing himself to the follow-up after the feint? The short answer is “punch him in the head as hard as you can.” Assuming for a moment that the guy doing the feinting isn’t completely incompetent, nothing stops that dance in its tracks faster than a stiff jab. If you’re throwing yours properly (see lesson 1), this should be fast enough and effective enough to reach the feinting opponent while he himself is temporarily out of position. After a round or two of that, you should be able to engage in more conventional combat…and you might be able to walk your opponent into a feint of your own if the traditional attacks aren’t getting where they need to go.

Finally, and wrapping up our two-part series on defense, there is what to do when all else has failed and you are getting clobbered in there. A punch, maybe more than one, has gotten through and your choices are to either fall down or to let the referee stop the fight. Not everything here is necessarily going to win you a fight (you just got the stuffing beaten out of you) but it might buy you enough time to get back to your corner for a minute to clear the cobwebs out of your brain.

The easiest thing to do is to clinch. Reach out and hug your opponent like a Soviet bear, making sure to grip the shoulders with the top half of your arms such that the enemy cannot move his hands to punch you. The referee will step in and break you, and if you clinch too much the ref has the option to take a point away or ultimately disqualify you (the rules of boxing specifically forbid grappling). New fans of the sport can rather readily spot this tactic, and it usually leads guys like Teddy Atlas to say “he’s just trying to survive in there” with the implicit excited tone of “we may be about to see a knockout, folks.”

The second tactic is to throw an illegal punch. If the choice is to absorb a point deduction or to be knocked out, bear in mind that if you lose a round without getting knocked down but get penalized, it’s a 10-8 round against you—the same as it would be if your opponent dropped you, the difference being that instead of having ten seconds or less to recover your wits (if the referee doesn’t just stop the bout as soon as your ass hits the floor), you get five minutes to recover your wits while your opponent is doubled over in the corner saying “Ow, my balls!” It’s dirty. It will get you disqualified if you do it more than once or twice. But it beats getting knocked out.

Finally, you can take a knee. Go down and the ref will have no choice but to count. But if you’re going this route, just hit the other guy on the forbidden speedbag. If you’re going to lose a point, take something with it.

Next Week: Being a Boxing Fan for Beginners: Who’s Who in the Sport.

Fox Doucette covers Friday Night Fights for The Boxing Tribune. His weekly column, The Southpaw, appears on Thursdays. Follow him on Twitter @RealFoxD. Fan mail, hate mail, and punches to the balls can be sent to beatcap@gmail.com.