Upon hearing that Miguel Cotto would not be trained by Emanuel Steward for his December 3 rematch with Antonio Margarito, I could not help but think this was a huge mistake for the Puerto Rican superstar.  Cotto has replaced Steward with Pedro Luis Diaz, who worked with the great Cuban National teams. 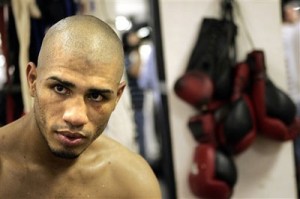 Anytime I have ever written about Cotto, I start with the disclaimer that I am a fan of the tough fighter.  But my appreciation of Cotto as a fighter aside, this wreaks of a very bad decision.

I am not going to even try to guess the reason for the change as I have not spoken with Cotto, Steward, or Top Rank executives, so I will not be speculating on the reason for the split between fighter and trainer.  What I will speculate on is how this will affect Cotto as a fighter and his chances against Margarito.

When Cotto was rising through the ranks and first becoming a champion, he was a mechanical destroyer.   While being known as brutal body puncher, that power was set up with a dedication to boxing technique.  Cotto’s ability to measure and stalk his opponents with solid footwork and controlled aggression gave him the opportunities to land his heavy body shots that broke down his opponents.  He employed an underrated thudding jab that forced his opponents to backpedal, playing right into the Boricua Bomber’s hands.

Watch Cotto’s early bouts against Carlos Quintana and Zab Judah and you can clearly see the technical skills.  He was always balanced and in control of his movements. Then he showed a further mastery of his skills when he out-boxed, out-slugged, and outlasted Shane Mosley in what was probably the high point of Cotto’s career (all fights mentioned available on youtube).

Then, somewhere along the way, he fell in love with his own power and started to forget the finer points of boxing.  Against Margarito he spent six rounds head hunting, dancing on his toes, and firing rapid combinations that did not rely on the jab.  It looked flashy and he won the rounds but then he ran out of gas and the iron chinned Margarito kept coming.  The lack of dedication to body punching and fundamentals allowed Margarito to stay in the fight (I realize I am not mentioning how illegal hand wraps may have played into the loss, but I am focusing on the change of tactics employed by Cotto at this time).

The lack of fundamentals continued in future bouts.  He was able to beat lesser opposition but struggled against Clottey and was run over by Pacquiao.  By the fight with Pacquiao, Cotto had basically lost his footwork.  He was often off balance against Manny, looking to land bombs and leaving himself wide open for counters.  Cotto was never a one punch KO artist.  He had a high KO ratio by beating his opponents into submission.

Enter Emanuel Steward for the fight with Yuri Foreman.  Cotto was back to being balanced, technical, and focused on grinding down his opponents body.  Not to mention it was clear the fighter had a trainer (which is another way of saying the employee had a boss telling him what he was supposed to do).  When Cotto had his strength coach Joe Santiago training him it was clear Miguel was in charge.  This rarely works for a fighter as most boxers need that trainer leading the way.  Steward is taking a backseat to no one and put his mark on Cotto’s style.  Cotto looked like the Miguel of old against Foreman and in his KO of Mayorga.

So with the return to old and improved form I find myself baffled with the sudden change for what will be a giant mental and physical obstacle in overcoming Margarito.  Even with no funny hand wraps, Margarito presents a terrible style match for Cotto.  The Puerto Rican fights better stalking and moving forward, but Margarito does not go backward.  Cotto grinds his opponents down but Margarito does not wear down.  Cotto will need every advantage he can get to win this fight.  He will also need a leader to overcome the mental aspect of getting back in the ring with a man who, fair or not, grinded him down into a bloody mess that could not continue.

It is hard for me to speak ill of Cotto, but I just don’t see the logic.  If it was money, pay Steward what he wants.  If it was something else, just make it work.  I hope I am wrong that this is not a terrible decision.  Cotto deserves his chance at redemption.  But considering the career trajectory of up, down, and back up with Steward it just feels like Cotto had found his Zen master in Steward and this decision could be one his team regrets.