Saturday from Springfield Missouri, cruiserweight contender BJ Flores will headline against Paul Jennette in an 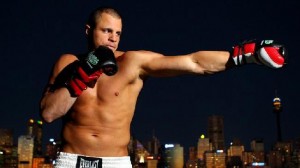 untelevised card.  The fight is likely not to provide much of a challenge for Flores and more to keep busy.

Flores 25-1-1 (16 KO) was undefeated in his first twenty-one pro fights when he took his first big step up in competition against hard punching Darnell Wilson.  Flores out boxed Wilson to take the win by unanimous decision and then won his next two bouts before taking on  Danny Green in November 2010.  Green, fighting at home in Australia won a wide unanimous decision, handing Flores his first loss.

Flores bounced back in July with a win over Nicolas Iannuzzi in Missouri where Flores picked up the NABA USA Title and the WBO NABO title.  Now Flores returns to Springfield Missouri, headlining at Drury University in a ten round bout defending his two minor straps.

Jennette, 11-3-1 (8 KO) is largely untested.  The two notable names on his record are former Contender Show alumni Ryan Coyne and Danny Santiago.  Jennette lost to both by unanimous decision.

Also on the card is the previously mentioned Contender Alum Ryan Coyne 17-0 (6 KO) taking on James Crawford 40-13-2 (17 KO).  Coyne, who had to leave the Contender show early after a win when he suffered a tournament-ending cut, is still being built as a prospect.  The veteran Crawford has lost his last six bouts including bouts to Jean Pascal, Adrian Diaconu, Scott Pemberton, Eric Lucas, and Danny Green.  Five of the six losses have been by stoppage.

At this time no TV coverage is scheduled for the event in the US.