The ageless wonder, Bernard Hopkins 52-5-2 (35 KO) will continue his hall of fame career on Saturday when he defends his light heavyweight titles (WBC and Ring Magazine) against Chad Dawson  30-1 (17 KO) from the Staples Center in Los Angeles.  Hopkins became the oldest man to win a major title when he won a decision over Jean Pascal earlier this year.  Now he defends that title against a much different 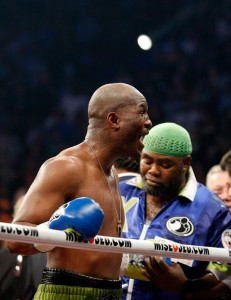 Hopkins’ two biggest victories in recent memory came against young, hard-charging aggressors, Kelly Pavlik and Jean Pascal.  This time around he faces a cerebral long-armed boxer.  Dawson will present challenges for Hopkins.  He has a good jab to keep a shorter opponent at bay.  Dawson, in the past, has been willing to simply outbox an opponent with his length and skills even if the fight provides little excitement or fireworks.  Hopkins has feasted on the young by taking advantage of their forward charging aggression, but this may not be available against Dawson.

Making matters more interesting, Dawson has brought former middleweight champ Winky Wright into his team.  Wright is known for being a defensive, careful boxer like Dawson.  Winky also fought Hopkins and was beaten by decision against “the Executioner”.  Hopkins showed little concern over Wright being added to the mix, addressing Winky as a trainer at a recent press conference.

“He hires Winky Wright, Winky Wright.  He hires stinky Winky, a guy I sent into retirement.  I mean that is like getting a guy to teach me to take my driver’s test and he doesn’t even have a license because he couldn’t pass the test.”

One rationale is that Winky was brought in to help Dawson deal with Hopkins as a “dirty fighter”.  Dawson has praised Hopkins skills and career but has referred to him as having dirty tactics.  Hopkins, of course, has something to say about the accusation.

“I’ve been called worse names than that.  I feel that I’m a fighter who built a legacy off of winning and showing my craft.  You get your credentials for the hall of fame by doing things that are very unique.  To me, calling me a dirty fighter, it sounds like he is already complaining and we have not even thrown a punch yet.  Again that is the difference between being a veteran.  He is trying to put it out there that I am a dirty fighter.”

Another obstacle for Hopkins will be selling this fight.  Unlike the fights against Pascal and Pavlik on regular HBO this bout is on PPV, meaning it needs to be sold to the public as something they want to buy.  Hopkins has a reputation for not being in the most exciting fights although his recent bouts have provided more entertainment.

One thing is clear, that Hopkins is clear on his future and believes despite the age he will again take down a much younger challenger.

“My goal is to fight and continue to put a page in this history book that I have already established. As long as I have the desire and I continue to win and not embarrass myself and embarrass the sport.”