Some of the decisions that boxing matchmakers and promoters come up with when programming a fight card leave me and a fair few others scratching our heads. Like the title of Saturday night’s pay-per-view, just for starters. Trying to trace the line of thinking from Ripley and/or George Costanza and/or The Greatest American Hero to a Bernard 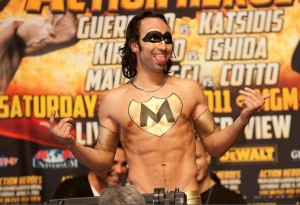 Hopkins fight is a bit like trying to figure out how Pinky comes up with an answer when the Brain asks him “are you pondering what I’m pondering?”

Meanwhile, the matchmakers asked “are you pondering what I’m pondering?” and the answer was clearly “I think so, Brain, but why would fans want three action fights on the undercard when we can show them Paulie Malignaggi instead?” So Luis Collazo, you’re bumped. I’d say God knows why but even He is at a loss on this one.

Malignaggi is so short on power that any decent fighter could probably drop his hands, stick his chin out for Paulie to hit it, and not go down from the shot. My grandmother turns 81 years old next month and she could hit harder than Paulie does. His most recent knockout victim, and only the third since the Brooklyn native graduated from the hobo circuit after his third pro fight, was a guy named Michael Lozada who has been knocked out seven times now (and is 3-8 with seven KO losses outside of Mexico), and if one were really feeling particularly uncharitable it could be pointed out that the sixth-round stoppage was the longest it took any of those seven guys to get rid of Lozada.

He also looks like the most stereotypical guido airhead this side of Jersey Shore. Unless your name is Snooki, this is not a trait that screams “fan favorite”…unless the idea is that he looks like someone you want to punch in the mouth and you enjoyed living vicariously through Amir Khan as much as I did when those two guys got in the ring and Khan wiped that guido smirk off of the “Magic Man”’s face with a catering truck’s worth of knuckle sandwiches.

Malignaggi leads air Saturday night with a Mexican by the name of Orlando Lora, who has beaten up a lot of folks who spend more time on their backs in the course of their profession than Sasha Grey. If Lora’s power is anything other than a reflection of his level of opposition, that’s about the only hope this fight has.

So why the hell did the makers of this event decide to bump the Luis Collazo fight from air? Was there really a gigantic contingent of frat boys just itching for the chance to pay fifty bucks and tune in early to watch a snoozer of a fight? I thought those guys were into MMA. Just because one of the combatants looks like a UFC douchebag doesn’t mean that all the other Ed Hardy shirt-wearing, tribal-tattoo, hat-size-IQ gang will tune in, especially since Malignaggi hits like a ton of bricks…if the bricks are made out of Nerf.

This is not to say that knockout-deficient fighters aren’t fun to watch. Look at Bernard Hopkins in the main event just for starters. B-Hop hasn’t knocked anyone out since he deposited Oscar De La Hoya on his smug ass back in 2004, but for the true connoisseur of the Sweet Science, every one of Hopkins’ fights since has delivered the goods. Hell, back in the 1930s Slapsie Maxie Rosenbloom had about an 8% KO percentage in his wins (compare Malignaggi’s 21%), making his name a catchphrase among boxing historians (partially due to that great—and fitting—ring nickname), and he went on to be a lovable big lug type in Hollywood movies, essentially being Jackie Gleason before Gleason was Jackie Gleason. Somehow I don’t see Paulie Malignaggi going the same way.

“What do you care, Fox?” you may be asking right now…and I’ll tell you. It’s the same damn lament everyone who writes about this sport gives you when people spend actual money to watch rotten fights. Saturday night there will be two very likely thrilling action fights (Holt-Garcia and DeMarco-Linares), a fight that will be short on action but long on skill and championship implications (the main event), and…this stinker in the opening bout. I get that P.T. Barnum was fond of saying “we’ve got something for everyone”, but if part of that something is “something for people who like crap on a stick”, would it freakin’ kill you to bump this fight to off-air, maybe out of the Staples Center entirely and contest the bout at the nearest freight railyard where it belongs? I throw up my hands. But what the hell do I know, I’m just a guy who covers the sport and doesn’t have promoters bribing me to pimp their crap for nothing more than the price of a buffet ticket.

Fox Doucette covers Friday Night Fights for The Boxing Tribune. His weekly column, The Southpaw, appears on Thursdays. He’s not worried about Paulie Malignaggi reading this and trying to beat him up, because he’s pretty sure he could take the Magic Man if it came to blows. Fan mail, hate mail, and purse bids for Doucette-Malignaggi at super middleweight can be sent to beatcap@gmail.com.