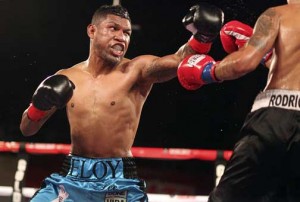 Perez is not sitting idle as he continues to work toward a shot at the world championship.  In the spring of 2011, he defeated longtime contender Roger Gonzalez and Alejandro Rodriguez by unanimous decisions.  In September, he faced Daniel Jimenez whom he dropped twice in the first round before ending the bout with an impressive second round knockout.

Terry began his career going 24-0 but is coming off three straight losses by TKO.  He comes into this fight trying to resurrect his career with a win over an undefeated titleholder.

The ten round main event will air on Telefutura’s “Sólo Boxeo Tecate” at 10:30pm ET/PT.