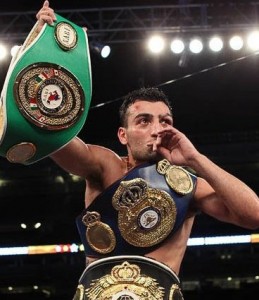 October 29th at the Winstar Casino in Thackerville, Oklahoma.

Ranked #8 by The Boxing Tribune and trained by Freddie Roach, Martirosyan is an exciting up-and-comer in the junior middleweight division.  To the surprise of boxing fans everywhere, he recently turned down a fight against the number one ranked junior middleweight Alfredo Angulo.  Current manager Serge Martirosyan, uncle of the young fighter, explained that Team Vanes felt it was too early to take this fight.  By first defeating the other contenders in the division, both fighters could meet down the line in a world championship bout and make more money.

In his last fight, Martirosyan faced Saul Roman (34-8).  Martirosyan went down in the first round but came back to send Roman to the canvas in the seventh with a hard right.  Roman beat the count but Martirosyan went in for the finish and the referee stopped the action with two seconds to go in the round.

Gutierrez, a gatekeeper in the division, is coming off three consecutive losses, two by way of knockout, but has been in the ring with some capable fighters including Joshua Clottey and Alfredo Angulo.