To paraphrase Samuel L. Jackson, “Enough is enough! I have had it with this motherfucking Latin Snake in this 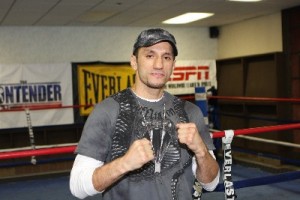 motherfucking boxing ring.” Yes, the latest edition of Snakes In The Ring goes off this weekend as everyone’s favorite boring-as-hell middleweight, Sergio “The Latin Snake” Mora (22-2-2, 6 KOs) takes on Mexican cannon fodder Jose Alfredo Flores (45-11, 26 KOs) in what is clearly a get-his-feet-wet comeback fight for Mora after suffering a career-destroying loss to Brian Vera on Friday Night Fights back in February.

I don’t mean to give Mora so much grief, but I can’t shake the feeling that every minute he spends in the gym working on his boxing is a minute he’s not spending working on his true calling in life, since I have heard him twice now on ESPN doing fight commentary and he is, when you account for his inexperience at the craft, one hell of a talent. He covered Lucian Bute’s demolition of Jesse Brinkley for the network last October and filled in for Teddy Atlas in August on Friday Night Fights, and both times I came away like “if this keeps him out of the ring, that’s a win-win.”

Color commentary, for any sport except bowling, is a hell of a task. Watching the game or fight unfold and spotting things from a knowledgeable perspective then relaying insight on that perspective that is both useful and accessible to the fans is a very tall order indeed. I’ve tried it (thanks to Wakefield (MA) High School’s excellent TV Production program) and I’m just glad that YouTube hadn’t been invented yet because “Boom Goes the Dynamite” Guy was John Madden by comparison. My pathetic commentary would surely have gone viral.

Mora knows how to inform without lapsing too deeply into jargon or stating the brutally obvious. Besides Mora, there aren’t a lot of guys who can do this consistently, fight after fight, broadcast after broadcast. Teddy Atlas is the gold standard on ESPN and on NBC’s Olympic coverage; anyone wanting to truly learn the sport should have FNF as mandatory viewing. Emanuel Steward has done yeoman’s work on HBO, even if he is a little more excitable than he should be during a great fight (Round 9, Ward-Gatti I. The prosecution rests.) Even Roy Jones, when he can get away from his desire to have his brain turned to tapioca by guys like Denis Lebedev, tends to be insightful and well-spoken, even if he is destined to end up making Muhammad Ali look steady as an Army sniper if he doesn’t hang up the gloves for good.

I love the fight game as much as any man alive (which I’m pretty sure is a job requirement at the Boxing Tribune.) Once upon a time, I fought a few unsanctioned amateur bouts with some friends of mine—we were Fight Club before it was cool. I’ve been knocked out twice, once by a body shot I’ll never forget, the other time by a head shot I’ll never remember. I’ve also dished out a few count-to-ten moments of my own. I love the fight game. But if someone said “we’ll pay you good money to talk about other people getting beaten silly”, I’d be all over that—it’s a lot less painful that way and the thrill of the hunt is still very much there. Plus, I like my brain cells and would really enjoy them if they decided to stick around.

That’s not to say that all former (or current) fighters are suited to the broadcast booth. I heard Delvin Rodriguez call a fight in English, and all I can say is that I hope he’s better on ESPN Deportes because he was painful to listen to when I heard him. Kill-or-be-killed contests with Pawel Wolak are a much better use of Delvin’s natural talents. Andre Ward’s a better boxer than he is a commentator, although to be fair calling the Demetrius Andrade-Grady Brewer snoozefest would be a challenge for anyone to make interesting and the Lundy-Diaz fight could’ve been called by an in-character Ben Stein and still been a thriller.

This isn’t limited to ringside either. BJ Flores and Bernard Hopkins both had great chemistry with Brian Kenny in the studio on FNF. Part of that is BK’s world-championship caliber ability to sell his guest’s lines and keep the flow going in a two-man team (Max Kellerman owes his career to Brian Kenny making him look good on FNF all those years ago.) Flores is another guy I’d like to see hang up the gloves and refine the commentator’s art.

But I digress. Much like Johnny Carson had Jay Leno as his permanent guest host during the last few years of his tenure on The Tonight Show, ESPN needs to seriously consider making Sergio Mora the permanent guest host when Teddy Atlas is training Alexander Povetkin or getting in trouble with the network for daring to be honest and speak the truth in his mind. A few more reps behind the mic will make the Latin Snake a better commentator…and a few more excuses for him not to step into the ring will make me a happier fan.

Fox Doucette covers Friday Night Fights for The Boxing Tribune. His weekly column, The Southpaw, appears on Thursdays. No, really, Thursdays. We promise. Fan mail, hate mail, and solidarity from midterm-embattled college students can be sent to beatcap@gmail.com.