In a week when modern Heavyweight boxing has found itself under the microscope as it comes to terms with the passing of one of its finest, Tyson Fury stepped into a ring in his hometown, Manchester, to try to 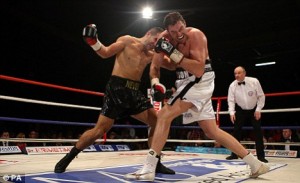 silence those critics who insist that the sport’s flagship division is in a permanent state of disrepair. To do so, he had to turn back the challenge of Canadian champion Neven Pajkic.

The world of Joe Frazier, Muhammad Ali, George Foreman, Ken Norton et al, looks a galaxy away from the current Heavyweight picture – one in which the ham-fisted Klitschko brothers hold sway over a motley collection of plodding Eastern Europeans, overweight, cheque-hungry Americans, and apologetic Brits.

Englishman Tyson Fury stands 6 feet 9 inches tall, weighs 260 pounds, and reckons he’s a fight or two away from dismantling the Klitschko’s kingdom. Fury resolutely refuses to adopt the shrinking violet role so often the preserve of the British heavyweight (and surrendered this summer by David Haye) and instead covets a public persona that veers between the glad, the mad, and the very bad. Fury’s 16 fight career has yielded British and Commonwealth titles and a reputation for giving the public a decent night’s entertainment. On the downside, the 23 year old appears to have a calamitous life outside the ring, courtesy of the gypsy blood that courses through his veins.

On Saturday night Pajkic came to the ring with an identical 16-0 record, but with fewer stoppage wins than Fury, and a glaring disparity in the quality of his opposition. At 6 feet 3 inches Pajkic was giving away height, reach and home advantage to the champion, and if much was made pre-fight of some animosity that existed between the two fighters over some ill-judged comments made by the Canadian about Fury’s dysfunctional family, Pajkic seemed little phased by some of Fury’s bizarre ramblings in the buildup: “One minute I’m happy, over the moon. And the next minute I’m sad — like suicidal sad,” he said. “I feel like getting in my car and running it into a wall at 100 miles an hour. I don’t know what’s wrong with me. I’m messed up. I think I need a psychiatrist. I do believe I am mentally disturbed in some way. I’m just glad I’ve got boxing though, I feel better in the ring. That’s when I feel some relief.”

So when the first bell rang, Pajkic would not have been surprised that the following nine minutes or so were filled with a peculiar brand of heavyweight mayhem. In the first round, the Canadian shuffled forward chucking overhand rights at the upright Fury, who thrust out lame and ineffectual jabs and generally looked discomfited in the face of the onslaught. Several times in the round Pajkic found the target with industrial punches that should have no place in a boxing ring, and Fury seemed powerless to avoid them.

The second round continued in the same vein, although the Englishman was beginning to use an uppercut to some effect as Pajkic rushed in, until with a minute to go in the round, one of the Canadian’s right hand missiles detonated on Fury’s chin and sent him down on his backside. Fury was up quickly, and fired back as if the shock of the knockdown had awoken him from a stupor, but the round still ended with him under fire.

Which made it all the more surprising that Fury came out for the third looking the fresher of the two. Suddenly, Pajkic’s unco-ordinated attacks were falling short, and Fury’s own chopping right hand was coming into play. With a minute gone, Fury landed a combination along the ropes and Pajkic was bundled to the floor – he rose looking disorganised, and the two skirmished in centre-ring before another right from Fury dropped the Canadian again. Pajkic was up quickly again and looked ready to fight, but referee Phil Edwards inexplicably stepped in and waved the whole thing off. Sure, Pajkic looked disoriented and shaky, but in truth he’d looked like that from the first bell.

Fury, then, moved to 17-0, 11 KO’s, and afterward called out the Klitschko’s while his promoter Mick Hennessy opined that Tyson “is the most exciting fighter in the world, bar none.” The problem is that Fury’s fights are exciting for all the wrong reasons, and it’s clear that he has a lot of work to do before he’s capable of unseating those Ukrainians. One suspects too, that much like his namesake, Fury’s battles outside the ring could well be more destructive to him than anything he encounters between the ropes.