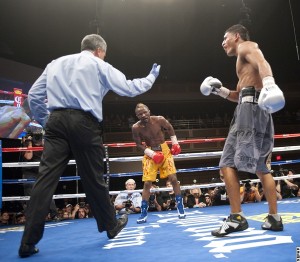 in a rematch of their first hotly contested bout.

These fighters first met on August 13, 2011 and Mares won the title match on a controversial majority decision.  Agbeko’s promoter, Don King, filed a formal complaint and the IBF granted his request for an immediate rematch.  It was determined that inappropriate actions taken by the referee may have affected the fight’s outcome.  Repeated low blows doled out by Mares either went unnoticed by the referee or the fighter was simply warned without points ever being deducted. In the eleventh round, the referee began to count out Agbeko, who was doubled over on the canvas after receiving a low blow.

Mares boasts an amateur record of 112-8 and is a decorated Olympian.  He is ranked 2nd in the world among bantamweights.  Notable bouts for the fighter include a split decision win over Vic Darchinyan and a draw versus Yonnhy Perez.

Agbeko is ranked 4th in the world among bantamweights.  Aside from his last loss against Mares, Agbeko’s most recent loss comes against Yonnhy Perez in 2009.  A rematch against Perez in 2010 allowed Agbeko to regain the IBF bantamweight title until he met Mares in 2011.

The bout will take place at the Honda Center in Anaheim, California and air on Showtime at 9pm ET.  The card will also feature more bantamweight action with highly ranked fighters Anselmo Moreno vs. Vic Darchinyan.