Former undisputed heavyweight champion Riddick Bowe sat down with The Boxing Tribune’s Kelsey McCarson recently to discuss his planned 2012 comeback, his epic wars with Evander Holyfield, and what he really thinks about the Klitschko brothers.

The Boxing Tribune: Riddick, the first question I want to ask is just something I’ve always wanted to ask somebody 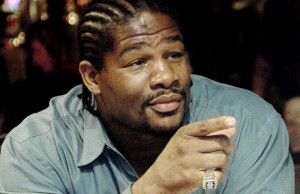 like you.  You’re one of the very few people who can answer this question in the world, and that is, what is it like being the undisputed heavyweight champion of the world?

BT: Yeah that sounds awesome.  So Riddick, what we’ve heard out there is that you’ve decided to come back and fight so I guess the obvious question is – why now?

RB: Why not now?  I mean I think right now is a good time.  I think the heavyweight division is wide open so it’s as good a time as any.

BT: Right, and so what do you think about the current crop of heavyweights out there?

RB: I don’t.  But I think that me coming back now will give the Klitschkos an opportunity to really see if they are champions or whatever.

BT: What do you think about the Klitschko brothers as champions?

RB: I don’t.  But the thing is I feel like with me being 6’5” that I can match them in size and we know I’ve got the experience and everything else so if they can whoop me then they deserve to be champions.

BT: Yep, you were a great fighter.  Actually, I grew up watching you fight guys like Evander Holyfield.  It was a great era then.  Heavyweight boxing in the 1990s was one of the best heavyweight eras ever, I mean historically speaking.  Did you guys know or did you know how good that era was back then or were you guys just living in the moment?

RB: Well when you’re in it, and you just listed everything, you’re just living in the moment.  But like you said, it was a great era and I am glad I had, you know, a guy like Evander Holyfield to bring the best out of me.

BT:  And so obviously the big guys of that era were as you mentioned Evander Holyfield, yourself, Mike Tyson and Lennox Lewis a bit later – excluding yourself, who do you think the best of that era was (out of those three)?

BT: Do you wish now that you would have fought Tyson and Lewis?

RB: Well I love to fight.  I would have loved to fight them, but let’s go back to [Lewis], he ducked me any way he could.  I mean he knew, with me being champion, I’m not gonna give him [a] 50-50 [split], you know what I mean?  So he used that as an escape.  He knew he couldn’t whoop me so he just avoided me the best way he could.  But anyway, I know Mike was a great fighter, but you gotta remember a big guy that could move with a good left hand could give him a lot of trouble and that’s the kind of fight I don’t think he’d wanna be in.

BT: So if you could go back to then, or maybe even now, and fight just one of them, which one would you choose: Mike Tyson or Lennox Lewis?

BT: Alright, so your comeback – I’ve heard you were planning a January return?

BT:  Have you identified any possibilities yet as to who that first fight would be against?

BT: I’ve actually read through some of your recent interviews with other sites and saw that you were training and getting ready to get back into the ring…have you done any sparring yet?

RB: Um, I’ve boxed four or five rounds just with the kids trying to get my swagger back.

BT: Is that something (sparring) you do after you have your fight set to go and all that?

RB: You just take is as it comes.  I’m just taking my time with it.  Next month we start sparring with the big guys.  I’m not starting at the beginning, you know what I mean?

RB: Well I know me, and I guess it’s like this: I look at the heavyweight division and it’s wide open.  I mean at my best, who could give me a good fight?  I don’t see nobody doing that.

BT: Speaking of Evander fighting, are there any plans to maybe give fight fans a fourth fight with Holyfield?

RB: Oh man, I would love to fight Evander Holyfield.  I don’t think any of the other great heavyweights fought four times – that’s history in itself.

BT: Oh yeah…I grew up watching that stuff.  It was one of the best trilogies ever, so maybe we’ll get a fourth one out of that, huh?

RB: Man I’m gonna tell you something about Evander Holyfield, when he fights a guy like me and I fight I guy like him, we always bring the best out of each other so by no means should anyone out there ever think that a fight like that is a cake walk because it’s not.

BT: So you and your team have your comeback planned for 2012, do you guys have any idea about how many fights you plan to fight in that year?

BT: So I guess you’d kind of start and build your way back up?  How many fights would you expect before you jumped in the ring with a Klitschko brother?

RB: I’d probably say somewhere in between 8 and 15, because you gotta be sharp for them guys.

BT: What motivated or inspired you to be a boxer?  I mean it is obviously something you like to do.  Training is hard.

BT: You know that better than anybody.  So it seems like you like boxing enough to go through it so what is it about boxing that motivates you to do it?

BT: Well you have a career ahead of you and one behind you…what do you think was your greatest victory so far?

RB: That would probably be the first fight against Evander Holyfield.

BT: What would you consider your worst defeat?

RB: Losing [the second fight] to Evander Holyfield.  I didn’t think he did enough to beat me.  I thought the best he could have done was a draw.  I mean, who wins the title on a one point margin? No one.

BT:  And that was the infamous “fan man” fight, right?

RB: Absolutely.  That fight should have been a draw and I should have retained the title.

BT: And just in that moment, what was it like seeing that guy come down into the ring in a parachute with a fan on his back?

RB: Ah man that was crazy!  You don’t expect that.  That was what got me in all honesty.  I didn’t expect anything like that.  That whole night I didn’t understand at all.  It was just like a bad dream for me.

BT:  So who was the toughest fighter you’d say you ever faced?

RB: The toughest fighter was Evander Holyfield, but the hardest hitting guy that I ever fought was a guy by the name of Herbie Hide.  I beat him for the WBO heavyweight championship.

BT:  Well, to wrap things up, what do you want to tell your fans out there who are interested in your coming back?

BT: Any choice words for the reigning heavyweight champions – the Klitschko brothers?

RB: I mean, my last fight was over in Germany.  I fought on one of them guy’s undercards and they called me “Grandpa”.   Well I guess what I’m gonna say is that “Grandpa” is gonna tap that ass….

BT:  That’s great.  Well thanks so much for talking to us, Champ.  I appreciate it, and our readers appreciate it as well.