Unless you’ve been living under a rock for the past week, you’re no doubt aware that Muhammad Ali celebrated his 70th birthday this past Tuesday. Your columnist is a little too young (34) to have remembered any of Ali’s actual fights, but my parents’ generation spoke in reverential tones about the heavyweight division “before you were born” when I was a kid watching Mike Tyson come up and thinking he was the greatest thing in the world. I didn’t give it much thought, since kids are notorious for not being able to wrap their heads around things that unfold out of their direct view.

It wasn’t until the creation of the Classic Sports Network (now ESPN Classic) that I got to see those old fights, the 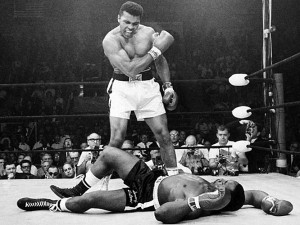 Ali-Frazier trilogy and Rumble in the Jungle and the “What’s My Name, Uncle Tom” fight against Ernie Terrell that for my money is my favorite in the bunch. Now, of course, if I had kids I could just show them that stuff on YouTube, but in my early twenties it was as much a revelation as it must have been for those older folks who watched it live.

The boxing media was alive with Ali tributes this week. Of course our own Fearless Leader had his take, but even ESPN.com devoted the front page feature of its site to an Ali retrospective. Every boxing writer—indeed, every sports writer—from the Baby Boomer or first-wave Gen-X generations had something to say, the younger ones marveling at Ali’s greatness in the ring, the older ones tending more toward the social context of Vietnam and this extraordinary black man who brought questions of the value of patriotism in the black community and indeed the value of patriotism at all to the fore of the national conversation. But one thing was clearly self-evident; everyone even peripherally involved in sports treated boxing as though it were the sport of kings (and not just Don either) once upon a time. Ali meant something. Boxing meant something. To those who were there, the enduring metaphors, both from Ali (pick a quote, any quote) and even from the rest of the heavyweight division (Cosell yelling “Down goes Frazier!” as George Foreman pummeled Smokin’ Joe) are part of the sports conversation, as timelessly transcendent as a Babe Ruth home run.

Fast forward to 1987, ten-year-old me, still yet to hit puberty and still unable to keep up with bigger, stronger kids on the baseball field or anywhere else. For a scrawny little kid, Nintendo provided for the first time a chance to carve out a niche, and sports games gave that niche a little bit of legitimacy. I was the first in my neighborhood to beat Mike Tyson’s Punch-Out on the NES, which when you’re ten means getting some props from those same kids who would conflate any sort of “impossible” achievement with “hey, you’re pretty cool.” The fact that Tyson himself was mashing through all comers in brutal fashion on TV, only added to his legend, and for a lot of those second-wave Gen-Xers, Tyson’s brutality was a transcendent moment in our own childhoods, a gateway drug toward enjoying boxing at a time when the talent pool from heavyweight on down was so loaded, memorable fights so frequent, that it produced a crop of fighters and fans alike.

Thing is, we’re the last holdouts of a generation raised on boxing. Lennox Lewis never really charged the souls of American kids (although the plethora of British boxers coming through the ranks now surely owe him a debt of inspiration). Evander Holyfield was a helluva champ but didn’t capture the national imagination except when he got his ear bitten off by the fallen hero Tyson. And the Klitschko brothers? Their style, in today’s action-packed instant gratification culture, ought to make Dana White see dollar signs and new fans.

Boxing simply doesn’t have the cultural cachet it once had. Sure, the metaphors are still there (a one-punch knockout, throwing in the towel, as many Rocky quotes as you can name), but we’re losing something from our national conversation. When Holyfield turns 70 (and he may have a fight that night), will we write reverential articles about him? When Lennox Lewis dies, will his name trend on whatever future versions of Twitter and Facebook are out there when it happens? Will we get a boxing movie worth watching more than once a decade?  In the words of Cliff Poncier, Matt Dillon’s rock-n-roll wannabe in Singles, “Where is the Misty Mountain Hop, where is the Smoke on the Water, where is the Iron Man of today?”

Then again, Muhammad Ali fought his greatest rival three times. The one and only rivalry that would have a chance of matching that today? Go ask Bob Arum. Don’t be surprised if he hangs up the phone without answering the question. Fat lot of good that does the sport.

Fox Doucette covers Friday Night Fights for The Boxing Tribune. His weekly column, The Southpaw, appears on Thursdays. Fan mail, hate mail, and delicious children can be sent to beatcap@gmail.com.