If you believe the heavyweight division is dead, then you haven’t been paying attention.  Here’s news, notes and updates from around the division courtesy of The Boxing Tribune’s self-proclaimed heavyweight guru, Kelsey McCarson.

Former WBA heavyweight titleholder Ruslan Chagaev (27-2-1, 17 KOs) returns to the ring this Saturday, January 28th in Hamburg, Germany against Kertson Manswell (22-3, 17 KOs).  Chagaev, whose hoping to bounce back from a close loss to undefeated Alexander Povetkin last August, will be looking to stay relevant in a division becoming increasingly more interesting as younger fighters begin creeping up towards the upper echelon where stalwarts like Chagaev have long endured.

Chagaev’s best wins are a SD victory over John Ruiz in 2006 and a MD win over Nikolay Valuev the following year for the WBA heavyweight title.   After that, Chagaev’s career was stalled when he was diagnosed with hepatitis, but he made it all the way back to the top of the mountain in 2009 where he had the distinction of fighting Wladimir Klitschko in a much anticipated bout to crown the  Ring Magazine heavyweight champion.   Klitschko proved too much for Chagaev, handing him his first loss as a professional.

The card will also feature undefeated heavyweight Denis Boystov (29-0, 24 KOs) who is taking on 37-year-old journeyman Darnell Wilson (24-13-3, 20 KOs).  Boystov is relatively untested, and while the fight against Wilson will add a more recognizable name to his record, the win won’t really do much to propel him higher in the division’s world rankings.   Boystov’s recent matches have had a decidedly American flair to them.  Wilson will be his 5th American opponent in a row.  Hopefully, this means his promoters are readying him to fight at the world level–meaning guys like Wilson would soon make way for more career-defining fights like a possible showdown with Chagaev or someone similar.

Heavyweight boxing fans are quickly becoming fans of the EPIX television network and that shouldn’t change anytime soon.  According to a recent press release by the company, EPIX will continue delivering more heavyweight action than any other network out there over the next few months by airing three upcoming heavyweight title fights: 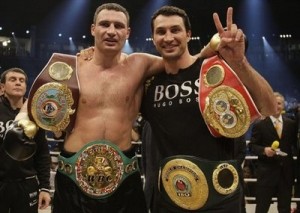 So while HBO and Showtime continue to ignore boxing’s glory division because the fighters are from other countries and have names that are hard to pronounce, EPIX seems ready and willing to jump right into the fray.

NBC Sports Network, formerly known as Versus, seems to be taking a similar approach.  Partnering with Kathy Duva’s boxing promotion company, Main Events, NBC Sports kicked off the first of four shows this year which will air on the network by featuring a really good heavyweight fight.  While their original main event didn’t pan out after Eddie Chambers pulled out of his scheduled contest with Sergei Liakhovich due to injury, Duva and company went forward unfazed.  Fans were treated with a spirited contest between (gasp!) two undefeated American heavyweights looking to make names for themselves.  Both fighters showed their mettle.  Bryant Jennings ended up winning the contest by decision and showed he soon would be a force to be reckoned with in the division, while Maurice Byarm displayed virtues that should serve him well in his boxing career: he was in shape, willing to engage and anxious for competition.

The British are coming!

Tyson Fury remains Commonweatlth champion and has shown so far that it’s pretty much impossible for him to participate in a bad fight.  He both hits and gets hit, and he seems to enjoy it as much as anyone possibly could.  Meanwhile, former British amateur star David Price called Fury out after his big win over John McDermott.  Price took McDermott out in quick and devastating fashion, which is something Fury couldn’t do in two tough wins over the same fighter.

“I’m the mandatory for the British title. Tyson Fury’s the champion. He’s a fighting man, and I know he’ll fight me…otherwise he’s going to look like a coward,” said Price following the fight.

In Fury and Price, Britain posts two good, young and interesting heavyweight prospects that are infinitely closer to being ready for the world stage than America’s best prospects are at this point.  Still, the prospect of a round robin someday between America’s Seth Mitchell and Deontay Wilder versus the British duo of David Price and Tyson Fury can’t help but bring a smile.

Wladimir and Vitali versus Manny and Floyd

People complain constantly about the heavyweight division, but at minimum the division’s biggest stars are doing more for the sport than boxing’s biggest icons.  While Manny Pacquiao and Floyd Mayweather seem to do everything they can to avoid fighting their top rival (each other), the Klitschko brothers go out of their way to fight anyone who could be considered a contender in even the broadest sense of the term.

The Klitschko brothers fight often and they fight anyone, anywhere, anytime.  Meanwhile, Manny and Floyd keep on avoiding the biggest fight in the new century.  It’s weak, stupid and fight fans should start supporting fighters like the Klitschkos who actually care for the sport more than prima donnas like Pacquiao and Mayweather who shrink from their greatest challenges.   Sheesh–at this point, I’d put more money on the brothers reversing the promise they made their mother by fighting each other before the two supposed all-time great little guys even think about negotiating a contract.