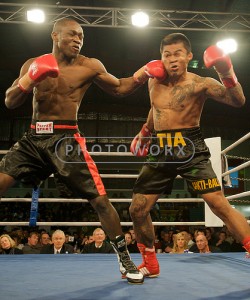 At twenty-six years of age, Omotoso has seen a mix of inexperienced and veteran fighters in the ring, but has yet to face much skilled competition.  In his last fight, he took a UD win over Larnado Tyner in an exciting matchup (read a recap of the bout here).  Saturday will be his fourth fight outside of Australia, and his third in the United States; his opponent, Mexican fighter Ramos, will be making his fourth appearance as a professional fighter.

The fight card will also feature six other bouts on the undercard including Vanes Martirosyan (31-0, 19KOs) vs. Troy Lowry (28-11, 17KOs) in the junior middleweight division.  All fights will take place in San Antonio, Texas at the Alamodome with doors opening at 6:30pm central.