Junior welterweight is the most loaded division in boxing, and 35-year-old fringe contender Joan Guzman (31-0-1, 18 KOs) looks to make a late-career run at a title in a fourth weight class. He gets a chance to showcase his abilities on national television as he takes on lightly-regarded Jesus Pabon (17-2, 11 KOs) in the main event of ESPN2 Friday Night Fights this 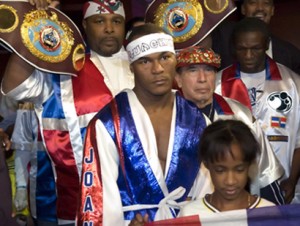 Joan Guzman is a big name by ESPN standards. He is undefeated in 32 pro contests and is a three-division titlist, having held belts at junior featherweight, featherweight, and lightweight. On the other hand, Guzman has the stain of a positive drug test on his record; his brutalization of Jason Davis in November of 2010 was changed to a no-contest from a second-round TKO due to testing positive for “a banned substance.” He is hardly the only boxer ever to garner a reputation as a cheater, but in the eyes of some fans Joan Guzman may have to prove he can fight cleanly.

His opponent in the main event could be charitably described as a no-hoper, so weak is his professional resumé when compared against a legitimate three-division world champion. Jesus Pabon has been knocked out in both of his losses, first against Luis Hernandez in 2007 and then in his last fight, eight months ago, against Javier Castro. Both of his knockout losses came in the second round; this fight Friday could be over in a hurry. When your biggest win is over Lenin Arroyo, you are not exactly Lamont Peterson in there. On paper this fight is a mismatch.

Meanwhile, in the co-feature, Ed Paredes could be best described as “a Lowell-type fighter.” He is from Lawrence, Massachusetts, ten miles east of the more famous Merrimack River mill town, a city which could be best described as “Dominicans north of the river and Puerto Ricans south of it who have been shooting at each other since 1978.” It is a rough-and-tumble city that produces rough-and-tumble people.

Paredes has some shockingly bad losses on his record. Ffirst in his second pro fight against Jerome Ellis (who is currently 12-11-2 after starting his career 5-0 including the win in his fourth fight against the Lawrence native), then against club fighter Gilbert Venegas by third-round KO in Salem, New Hampshire at a minor local show in 2007. His third loss came against legitimate junior middleweight contender Carlos Molina in 2009; Paredes is 8-0-1 in his last nine.

His opponent, Manuel Leyva, has lost his last three fights against a shopworn Joel Casamayor by split decision last March, by first-round KO to Dannie Williams, then three months ago to Not That Carlos Molina, The Other Carlos Molina (as in the 15-0-1 junior welterweight) by unanimous decision. Leyva’s career has taken a turn into journeyman opponent territory, which is the role he will be playing Friday night. Leyva has no wins against any fighters who are above the club level as professionals, and Ed Paredes is much better than a club fighter. This too is a mismatch.

Friday Night Fights airs on ESPN2 and ESPN3.com Friday, March 2nd, at 9 PM Eastern/6 PM Pacific. The Boxing Tribune will have a full recap of the night’s action including any swing fights that make air following the conclusion of the broadcast.

Fox Doucette covers Friday Night Fights for The Boxing Tribune. His weekly column, The Southpaw, appears on Thursdays. He lived in Lawrence, Massachusetts for a year back in the mid-90’s and knows the place well–watched the cops bust a crack house on his block and everything. Fan mail, hate mail, and natural-casing Essem #10 hot dogs can be sent to beatcap@gmail.com.