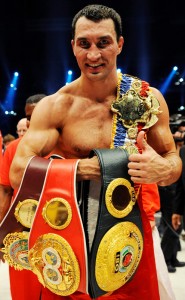 Mormeck, a 50-to-1 underdog in the fight, came out holding his hands high, bobbing and weaving his way inside, forcing Klitschko to grab and lean on him when he got in close. Klitschko was unable to extend his jab and had to shorten his jab and use his left hook more often than usual. Despite Mormeck’s determination to get inside, he threw very few punches and landed no punches in the round as Klitschko found his range and started working his jab.

Klitschko used the first round to get a feel for Mormeck and opened up in the second when he began to land his right hand. Klitschko dropped Mormeck in the second round with a flush right hand. Mormeck beat the count and made it out of the round, but looked like he was ready to go from that point on.

Klitschko mercifully ended Mormeck’s night in the fourth round, when he landed a hard right hand that stunned Mormeck. A short left hook landed on a crouching Mormeck and sent him to the canvas. Mormeck made it to his feet, but referee Luis Pabon had reached the count of ten.

“There are a lot of guys that are not well known yet. There is David Price, the tall guy standing ringside. There is Tyson Fury, even bigger guy. There is Povetkin, an Olympian and a WBA champion. There is some other guys; Seth Mitchell,” Klitschko stated when Chris Mannix asked if he has run out of challengers.

“I think Chris Arreola deserves the fight against me and I think that’s the fight we will make.”

On the non-televised undercard, cruiserweight contender Ola Afolabi (19-2-3, 9 KOs) scored a fifth round TKO over Valery Brudov (39-4, 28 KOs). Afolabi brutalized Brudov, dropping him twice and rendering him senseless at the end of the fifth round. The referee decided Brudov had taken enough punishment and stopped the fight as Brudov stood against the ropes unaware of which corner to walk to. Afolabi will be the mandatory challenger to Marco Huck should he return to the cruiserweight division, and will be named WBO cruiserweight titlist if Huck chooses to stay in the heavyweight division.