Let the record show that if “Hammerin” Hank Lundy (21-1-1, 11 KOs) and Dannie Williams (21-1, 17 KOs) can’t put on an entertaining main event, then there may be some real traction to the “ESPN2’s Friday Night Fights is cursed” meme that gains momentum with each passing week of the 2012 season. If that doesn’t get you excited for a night of boxing, then the co-feature sure will. Elvin Ayala (24-5-1, 11 KOs) takes on Hector Camacho Jr. (53-4-1, 28 KOs) in a battle of two guys with poor defensive skills and suspect chins, a recipe for a spectacular kill-or-be-killed fight. 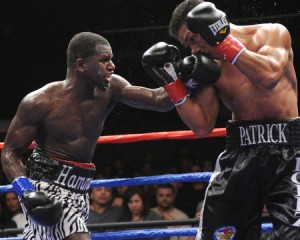 After Michael Cimino made the execrable Heaven’s Gate in 1980, famed New York Times film critic Vincent Canby said “it fails so completely that you might suspect Mr. Cimino sold his soul to obtain the success of The Deer Hunter and the Devil has just come around to collect.” It’s easy to apply the same sentiment to ESPN2 this year–more and more, the 2012 season of FNF is looking like the Devil coming around to collect on 2011.

Against this backdrop, stands quite possibly the most colorful, entertaining character to grace the network since Emanuel Augustus was still in his prime. Lundy has an enjoyable all-action style in the ring and just enough of a suspect chin (having been knocked out by John Molina and dropped by David Diaz in instant-classic fights on the Worldwide Leader’s air) to encourage his opponent to open up and go for the big shot. Lundy has learned through bitter experience how to keep a referee from losing faith in his ability to defend himself when he is in trouble; give Hammerin’ Hank half the chance and he’ll go on at length about how the referee shouldn’t have stopped the Molina fight, a fight Lundy was winning by wide margin on the scorecards.

That said, the loss turned Hank Lundy into the most dangerous sort of fighter in the sport; the one-loss fighter who is determined never to lose again. The overconfidence of an unbeaten prospect is gone, and in its stead is a guy who matures a little more every time he steps into the ring. Lundy got right back on the horse after losing to Molina, fighting then 14-1 Omri Lowther in the 2010 FNF season finale before two fights on the Worldwide Leader (making five consecutive fights on FNF for the Philadelphia native) in 2011, winning first over Patrick Lopez before the aforementioned fight with David Diaz, in which Lundy came back from a fourth-round knockdown to stop Diaz in the sixth with one of the great knockout punches of the year.

Lundy will be by far the greatest challenge Dannie Williams has yet faced as a pro. As recently as two fights ago, Williams was in against 3-10 John Willoughby in front of the weak Missouri commission, handing Willoughby his eleventh loss and fifth by knockout. Williams’ resumé as a pro is littered with guys whose records bring to mind the 2003 Detroit Tigers or 1962 New York Mets, and his last fight, on January 6th in Key West on the untelevised undercard of the vile Dyah Davis-Alfonso Lopez fight to open the FNF season, was against a guy (Fernando Trejo) with seventeen losses whose whole raison d’être for continuing his boxing career was to give rounds and lose to prospects. The only guy Williams has fought who was undefeated in at least ten pro fights (Eloy Perez, 13-0-2 at the time of their fight) is also the only blemish on the St. Louis native’s professional record.

All this is by way of saying that Hank Lundy has fought the much better competition in his career and would seem on paper to be much, much closer to a title shot or at least a real breakthrough in the rankings of the lightweight division than the man standing across the ring from him. Dannie Williams has a lot of knockouts but not a lot of real tests of his ability mentally as a professional. Hank Lundy has fought his last five fights on national television, three of them main events, and also holds the distinction of having gone at least ten rounds five times while his opponent has only done so twice. This fight has the very real potential to be something very, very special; Hank Lundy has never been in a boring fight in his life and Williams’ power and tendency to come forward with borderline reckless abandon creates an X-factor for what could turn into an absolute war.

The co-feature is a Kevin Bacon affair of sorts. Elvin Ayala and Hector Camacho Jr. share an interesting if dubious attribute; both have been first-round knockout victims of all-hat-no-cattle Montreal middleweight David Lemieux on ESPN’s family of networks. Ayala lost to Lemieux in a phone booth (the 15’6” ring mentioned in last week’s Recap here on the Tribune) at Uniprix Stadium on FNF while Camacho got his drubbing in front of an Internet-only audience simulcasting a Montreal card in October of 2010.

Ayala has made a comeback of sorts since his high-profile loss, compiling four victories against modest competition, the most recent triumph coming at the hands of journeyman Derrick Findley, a name perhaps best known to FNF fans as the sacrificial lamb used as Fernando Guerrero’s victim last February in the first boxing card televised in 3D. However, Ayala’s victims have not exactly been Sergio Martinez and Felix Sturm in terms of strength-of-schedule; the total combined record of the four guys he’s beaten is 46-21-2.

Hector Camacho Jr. has not fared much better. After the Lemieux loss, Camacho beat tomato can Juan Astorga (who had lost four of his last six before the fight, all by knockout) and who Camacho couldn’t get rid of despite eight rounds to make the attempt. Since that fight Camacho has been on a thirteen-month layoff, and it is a legitimate question to ask if perhaps Camacho is about to have the same sort of mental issues in the ring as Tim Coleman showcased two weeks ago on FNF. Failing to get rid of a guy who has been knocked out by guys far less talented than oneself is a real concern by which the continued viability of a boxing career is called into question.

Bottom line, though, is that the co-feature, every bit as much as the main event, is a battle between two guys who are good enough to catch their opponent making a mistake and weak enough to make the mistakes by which their opponent can catch them. It is just that sort of defensive liability that makes for exciting fights on the fringes of the sport; fans are advised to tune in right at the top of the show or risk missing a potential instant classic.

As a simple statistical matter, ESPN2 has to put on an exciting night of boxing sometime this year, if only to shake the Michael Cimino analogy mentioned at the top of the article. If Hank Lundy and Dannie Williams don’t deliver the goods, it’s hard to fathom anyone ESPN2 could trot out who could deliver the goods. Your columnist is optimistic, perhaps foolishly so, but will nonetheless go out on a limb and call this must-see TV.

Friday Night Fights airs on ESPN2 and online at ESPN3.com Friday, March 30th, at 9 PM Eastern/6 PM Pacific. The Boxing Tribune will have full coverage, including any swing fights that make air, shortly following the conclusion of the telecast. Stay tuned; we’re the worldwide leader in covering the Worldwide Leader.

Fox Doucette covers Friday Night Fights for The Boxing Tribune. His weekly column, The Southpaw, appears on Thursdays. He thinks Hank Lundy will have a world title at lightweight by the end of 2013. Fan mail, hate mail, and calls for a Lundy-Molina rematch can be sent to beatcap@gmail.com. Be sure to check out Gary Purfield’s excellent video interview of Lundy here on the Tribune.