After a period of confusion, Nathan Cleverly, Britain’s WBO light-heavyweight champion, will accept the challenge of Robin Kransiqi on the 28th April. The fight was announced a week ago but has been in limbo after the WBO refused to sanction the bout; it seems they’ve changed their mind and ordered the winner to defend against their mandatory challenger within 120 days. 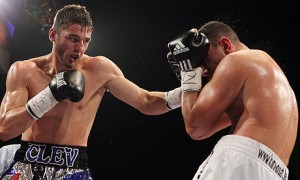 Cleverly , 24-0, 12 KO’s, will be fighting at London’s venerable old venue The Royal Albert Hall, which has seen many a skirmish but latterly has dropped off the London fight circuit.

On face value, Krasniqi shapes up as a decent challenge. The German has an impressive record, 37 wins in 39 fights – and 2 losses that occurred very early in his career. At 24 years old, Krasniqi will be ambitious but it has to be said that his record is littered with wins over fighters with very sketchy resumes, and he hasn’t moved in anything like the circles that Cleverly has.

Cleverly is building something of a following in the UK, but surely after this fight, whoever he ends up facing, he’ll start looking overseas. It’s no accident that promoter Frank Warren has put this show together on the same evening that Bernard Hopkins and Chad Dawson reprieve their abortive 2011 encounter – Warren would like nothing more than to entice either American into a fight with Cleverly should he sneak past Krasniqi.

It probably won’t be enough for Nathan to repeat his showing against Karpency, who showed some guile but little ambition in lasting the twelve rounds while Cleverly pumped out point-scoring but largely ineffectual punches. For Dawson or Hopkins to take notice, one suspects Cleverly will need to put the heat on and win impressively. Now that his promoter Frank Warren has negotiated a solution with the WBO, and confirmed Krasniqi as Cleverly’s next challenger, the 25 year old is just happy to be performing at London’s historic venue, whoever the opponent:

“It’s great to be the first boxer in over 10 years to open up the doors to the famous venue to boxing once again. I love boxing in London and I’m over the moon that Frank has put my world title defence at the iconic landmark and it will be the start of many big shows. It’s a who’s who of boxing who have fought at the Albert Hall and to add my name alongside the greats like Lennox Lewis, Naseem Hamed, Nigel Benn and Joe Clazaghe is a real honour.”