The Fort Worth Convention Center Arena in Fort Worth, TX will be the site for a night of boxing and music (yes music) all on one card/event.  Billed as Gloves and Guitars the event features seven boxing matches and several live musical performances. 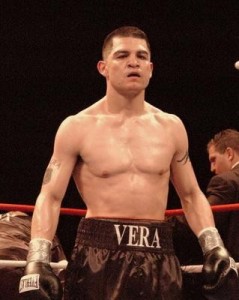 Headlining the fights is popular former Contender Show alum and Fort Worth resident Brian Vera 19-6 (12 KO). Vera is making his return to the ring for the first time since losing his rematch with Andy Lee in October of last year.  Vera became well known to the boxing public when he appeared on the reality show The Contender in 2007.  Despite losing by second round KO to eventual Contender runner up Jaidon Codrington, Vera won over fans with his humble nature and rugged style in the ring.

Since the Contender appearance, Vera has made the most of what he has.  He defeated Max Alexander on the undercard of the Contender finale and pulled a huge upset of Andy Lee in his next bout, stopping the highly regarded prospect in seven rounds.  Vera has appeared on ESPN FNF several times and also has wins over Sebastian Demers (TKO 3) and fellow Contender Sergio Mora by split decision.

Vera has also had his setbacks along the way.  He was stopped by James Kirkland in eight rounds where he put up a gutsy effort taking a pounding but could not return fire with Kirkland.  He also dropped decisions to Craig McEwan and Max Bursak.  Vera was then dominated by Andy Lee in the long awaited rematch.  Lee was able to outbox Vera from a distance and never allowed Vera to land the power shots that brought the knockout in their first meeting.  Despite the ups and downs Vera is typically high entertainment in the ring and is truly an overachiever that has made the most of his abilities.

Across from Vera is fellow Texan, Taronze Washington 14-16 (7 KO) who hails from Dallas.  Washington sports a sub-500 record but has been in with very solid competition.  He has dropped six of his last seven bouts but the losses include bouts with Glen Tapia, Austin Trout, and Lanardo Tyner, with the one win coming against Fernando Castaneda.  Four of the opponents were undefeated and all had well above 500 records.  Washington is known for putting up a tough scrap win or lose so he should blend well with Vera.