This weekend Atlantic City will take center stage on Saturday with the rematch between Bernard Hopkins and Chad Dawson.  Before that happens on, Atlantic City will host two veterans in the same weight class that will battle to stay in the title picture.  Yusaf Mack 29-4-2 (17 KO) and Omar Sheika 32-11 (21 KO) will meet in a twelve round bout for the USBA Light Heavyweight title from Resorts Casino Atlantic City.  The card is being put on by KEA Boxing and Nedal Promotions.  The winner puts themself firmly into the IBF rankings. The loser likely sees their last title shot washed away. 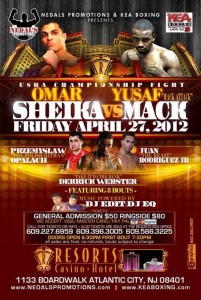 Both Mack and Sheika have been around the block.  They are two veteran fighters that have come close to winning a world title but thus far have not been able to kick down the door to their dream.  The similarities between these two end there.  Mack is charismatic in and out of the ring.  He moves around the ring with speed and grace.  Sheika is quiet and fights with little flash.  He simply moves forward pressuring his opponent and breaking them down to the body.  He is a dangerous puncher who has the luxury of taking a shot to land one thanks to his granite chin.

Sheika is often described as the true veteran war horse.  His resume features some of the best names of the last fifteen years in boxing.  Sheika, who resides in Patterson, NJ, has losses to Joe Calzaghe, Eric Lucas, Jeff Lacy, and Roy Jones Jr.  The biggest win on Sheika’s record was a close decision win over Glen Johnson back in 2000.  Sheika has been a pro for over fifteen years, has fought all over the world, and has fought for a major world title on four occasions.

In recent years, Sheika has been unable to get the biggest names into the ring as he did earlier in his career.  His last two fights were on local cards where he defeated young challengers Charles Hayward and Anthony Ferrante.  Sheika admitted after the Ferrante fight that it can be tough to get up for the smaller fights and he wants to get another shot at a title before all is said and done.

With this fight Friday, Sheika has the bigger fight he was looking for.  It is for a minor title but more, importantly, puts him into the rankings in a spot where his coveted major title shot could be around the corner.  Sheika has probably lost some steam physically since his last title shot when he lost to Marcus Beyer in 2005 for the WBC title, but he has made up for aging (he is now 35) with veteran smarts.

Sheika has become excellent at using his knowledge to overcome younger, more athletic fighters.  Several young guns over the last few years thought to add the name Omar Sheika to their resume only to find themselves cornered and absorbing the veteran’s brutal body attack.

Philadelphia’s Yusaf Mack, though, is no young gun taking on his first big name.  Mack is a twelve year veteran and talented boxer.  Mack started his career 22-0-2 running him right into a title fight eliminator in his twenty-fifth outing.  That fight in 2006 would be his first setback when he was stopped by Alejandro Berrio in six rounds.  Mack was then stopped again two fights later by Librado Andrade in a fight he had going well early.  Mack dropped the iron chinned Andrade in round one but eventually succumbed to Andrade’s pressure and was stopped in round seven.

After several wins, Mack found himself back in a title eliminator against the aging “Road Warrior” Glen Johnson in 2010.  Johnson attacked early and Mack never found a rhythm going out to Johnson in the sixth round.  Mack would recover with a win over Omar Pitts and landed himself his first title shot against rising Tavoris Cloud for the IBF Light Heavyweight title.  Again, Mack fought well early but was run down by pressure and stopped late in the eighth round.

This match will come down to which fighter can impose their style.  Sheika struggles with fighters who can move well and not allow themselves to be cornered.  The veteran wants to fight toe to toe, pinning his challenger against the ropes.  He was able to do this with Ferrante and others recently, but Garrett Wilson kept on his toes all night boxing and moving and Omar had no answer.  Mack certainly has the skill and speed to work this game plan.

The flip side is all four of Mack’s losses have come by knockout.  Several of which in fights where he was out-boxing his opponent, but allowed himself to get off the game plan and get caught.  Sheika is relentless and even if he is being out boxed, if Mack slips for a second Sheika will be there to make him pay.

In a way each fighter presents himself as the worst match-up for the other.  Mack struggles with rough and tough pressure fighters and Sheika struggles with smooth moving boxers.  While this card will not be the top focus of the big fight weekend in AC it may turn out to be the most interesting.  Boxer vs. brawler with two hungry veterans anxious to prove they still belong at the top.  The fight should also have a high energy crowd environment.  Mack draws well from Philadelphia and Sheik’s fans that come out in good numbers have a short ride from North Jersey down to AC.