We couldn’t make this stuff up if we tried. Saturday night, at 11 PM Eastern/8 PM Pacific, ESPN2 will air a “Friday Night Fights Special Edition”. Friday night…on Saturday. The action will be a one-off affair between Providence-based 2008 Olympian Demetrius Andrade (16-0, 11 KOs) and a sack of potatoes otherwise known as Rudy Cisneros (12-3, 11 KOs). The fight will be counter-programmed directly against the expected time of the main event of the Cotto-Mayweather PPV, so if you’re either too cheap to buy the PPV, too lazy to find a bootleg Internet stream, or contractually obligated to cover all things ESPN for a boxing website, you’ll have something to watch on basic cable. 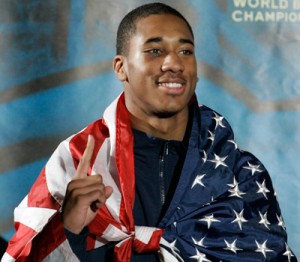 To call Rudy Cisneros a sack of potatoes is to do a grave disservice to the durability of a potato. Cisneros lost a truly ugly fight to Jonathan Gonzalez last May 13th on the undercard of the Holt-Diaz FNF KO of the Year in 2011. Cisneros managed to stretch that fight to seven rounds against Jonathan Gonzalez, but by the time Cisneros’ corner threw in the towel in that seventh round, their charge showed clear signs of having been beaten well past the point of decency even in a violent sport like boxing. If anything, the seven-round final distance of that fight was an indictment of Gonzalez’s prior opponents (Gonzalez picked up his 13th win in as many fights, all by knockout, and all over scrubs, palookas, and tomato cans; since that fight he has won decisions over genuine fighters Richard Gutierrez and Billy Lyell) rather than testament to any staying power on the part of Rudy Cisneros.

Demetrius Andrade has long been a bugbear to your columnist; his pathetic quality of opposition coupled with ESPN’s relentless attempt to force him down our throats as the next big thing at junior middleweight when he has done nothing to earn that distinction (especially in a division as loaded as the 154-pound ranks) has made him a regular target of criticism here at the Boxing Tribune. His choice of Cisneros and his choice of venue against a major pay-per-view where he can get a win without anyone having to actually see it just reeks of puffing up his “been on TV __ times” bullet point in his press kit. Thankfully, no trinket, not even the most minor of minor belts, is on the line, so at least Andrade will not be allowed to call himself a “champion” like he’s…well, like he’s Miguel Cotto, the consensus top guy at his weight.

This fight is not expected to be competitive, although people said that about Ismayl Sillakh vs. Denis Grachev last week. Rudy Cisneros will be an even bigger underdog than Grachev was, however; Demetrius Andrade is fighting an opponent who is tailor-made for his style and he is fighting in his backyard at Mohegan Sun Casino in Connecticut, less than an hour’s drive from Providence. Once again, the only reasons to watch this fight are if you’re a journalist assigned to cover it, a member of the promotional team at Star Boxing, or you just really don’t like Floyd Mayweather and don’t want to see him fight.

“Friday Night Fights Special Edition” airs Saturday night, May 5th, on ESPN2 and ESPN3.com at 11 PM Eastern/8 PM Pacific. The Boxing Tribune will have a full recap of the fight following the conclusion of the action. Stay tuned—we’re the worldwide leader in covering the Worldwide Leader.

Fox Doucette covers Friday Night Fights for The Boxing Tribune. His weekly column, The Southpaw, appears on Thursdays. He thinks the ESPN programming department guys are out of their minds for counter-programming boxing against a Mayweather PPV, especially the main event! Fan mail, hate mail, and angry letters from Rudy Cisneros’ promotional team for that sack of potatoes crack can be sent to beatcap@gmail.com.