Hassan N’Dam N’Jikam (26-0, 17 KOs) and Max Bursak (24-0-1, 10 KOs) will face off in a battle of middleweights on Friday, May 4 at the Palais de Sport Marcel Cerdan in Hauts-de-Seine, France. The WBO has sanctioned this fight to be for its “Interim” middleweight title, and the winner may eventually be forced to unify the title with current WBO World Title holder, Dmitry Pirog. 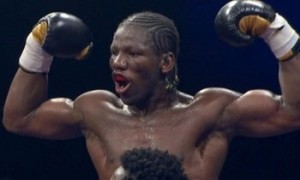 N’Jikam represented his native Cameroon in the 2004 Summer Olympics, and held one of three versions of the WBA’s middleweight belt. He is currently ranked number 11 by The Boxing Tribune. N’Jikam dropped his WBA Interim title this February rather than face Gennady Golovkin, who held the World Title (Felix Sturm is recognized as WBA titlist by The Boxing Tribune). To his credit, N’Jikam has fought and beaten Avtandil Khurtsidze and Giovanni Lorenzo, both respectable opponents, in his last two fights.

Bursak fights in the traditional European style, but has shown a penchant for countering off of his opponents’ mistakes, in the video that is available on him. He will be stepping up in class to face N’Jikam. Bursak has fought exclusively in his home nation of Ukraine, and the brightest mark on his resume includes a win over Brian Vera in 2010.