Ishe Smith (22-5, 10 KOs) ends a long period of inactivity when he returns against Ayi Bruce (21-6, 13 KOs) on Friday, May 4 at The Joint at the Hard Rock Hotel and Casino in Las Vegas, Nevada. The fight will be broadcast by Fox Deportes. 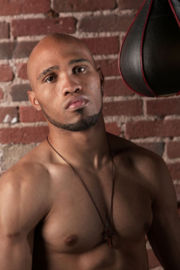 Smith became known as a contestant on NBC’s 2004 hit reality show, “The Contender”. The Las Vegas native was one of the more accomplished contestants and an early favorite to win it all, having scored consecutive victories over David Estrada and Randall Bailey going in, but lost to Sergio Mora in the second round of the tournament. Since the show, Smith has gone on to establish himself in losing efforts against Joel Julio and Danny Jacobs, and a win over Pawel Wolak in 2008. Smith has not fought since 2010, when he lost a close, disputed decision to Fernando Guerrero before beating Alexander Pacheco Quiroz later that year.

Bruce has lost three of four coming in, with two of those losses coming by way of technical knockout. He has no notable wins on his record, but has lost to Gabriel Rosado and Vitaliy Demyanenko.