“Do you hear that Mr Anderson? That is the sound of inevitability”. So said Agent Smith as he prepared to inflict mortal doom on Keanu Reeves’ ‘Neo’ in the original Matrix movie.

And by tomorrow (Tuesday), boxing fans will find out whether their ears heard correctly as the ‘Love him or loathe him’ british promoter, Frank Warren, announces his major summer show. 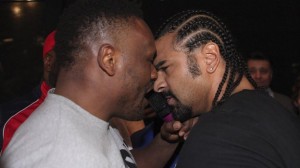 Rumours have been circulating for days about a possible showdown and while the prospect of a Haye v Chisora fight isn’t quite the same as being flattened by an oncoming tube train there is certainly an element of ‘car crash TV’ about the notion.

Its certainly more than likely that Warren’s bill will include one of his two ‘golden eggs’, the WBO Lightweight titlist, Ricky Burns against his chief domestic rival, the mercurial Kevin Mitchell with the bout taking place at the home of Mitchell’s beloved West Ham Utd football team, Upton Park. It will be Burns’s first meaningful defence (Paulus Moses was game but never really good enough) of the full belt he inherited from Juan Manuel Marquez who has now gone north permanently to try and settle a long running score with his nemesis Pacquiao.

But Upton Park is an ideal setting for 2 other Londoners to settle their differences with both only a tube ride away from the stadium and assuming that Warren has managed to find a way around the difficulties that both would have obtaining a British Boxing Board of Control licence following their shambolic performances in Germany earlier this year then this could provide the ‘spectacle’ that Warren needs to keep his Boxnation TV project on its tracks a while longer.

The debacle which landed Chisora and Haye in the BBBoC’s bad books happened both inside and outside a German ring in February, where Chisora ran Vitali Klitschko all the way to the cards in a spirited and entertaining affair.

Vitali has since claimed that a repeat of the shoulder injury which saw him lose to Chris Byrd in 2000 meant that he fought the Brit one handed for much of the fight, which puts Chisora’s apparent competitiveness into some context, but the boxing was overshadowed by episodes of outright thuggery with Chisora slapping Vitali across the face at the weigh in, spitting water in younger brother Wladimir’s face before the first bell and engaging in a post-fight press room brawl and making threats of extreme violence toward the agent provocateur, Haye, who sought the support of a bottle and then a camera tripod in making his physical point to Chisora.

In an episode containing numerous supposedly empty threats, Warren was also heard to comment that he would NEVER make Haye v Chisora but U turned faster than a politician on a unicycle in the days following saying that it would be a highly sellable fight. Kerching!!

And with links to Haye’s manager, Adam Booth, through their roles as promoter and manager of British Super Middleweight rising star George Groves, it appears as though Warren and Haye have come to some sort of arrangement to tempt the Bermondsey man back from retirement.

Haye, once the darling of the british boxing public courtesy of his unification of the Cruiserweight division courtesy of 2 barnburners against Jean Marc Mormeck and Enzo Maccarinelli and then the capture of heavyweight honours with 12 rounds of tactical mastery and composure, pot-shotting the Russian goliath Nikolai Valuev, has since fallen completely from grace.

First peddling a couple of absolute stinkers on Sky, defending against a well past best John Ruiz and then a PPV sham 3 rounder against perennial career underachiever Audley Harrison, all the while bragging that he was the man that would destroy the Klitschko legacy. He finally stepped, on 9 good toes and 1 seemingly bad one, into the ring with Wlad. We all know how that ended!

Before turning up in Germany in February, the last thing Haye had been seen shamelessly peddling to a once adoring boxing public was his autobiography!

Chisora, on the other hand, has never been anyone’s darling but at least hasn’t sought to be. He is respected for his tenacity in the ring. Won some favour after suffering a home town robbery in Finland at the hands of Robert Helenius. But ultimately remains the boxer most British fans love to hate. Notwithstanding the recent competition from Haye for that title, of course.

So as this article lands we will know whether the sounds we heard were indeed the inevitability of this bout. However it gets made, likely without the blessing of the BBBoC and Warren’s promotional rival Barry Hearn (whose son, Eddie, heads up Matchroom Boxing) has called for the governing body to be more proactive in vetoing the fight, it’ll be exactly the sort of bout that fight fans love. Filled with spite, a promoters fantasy given the ability of these two to produce soundbites that would make the most broadminded of souls wince.

This writer hopes, in the name of decency and the promotion of the sport as a positive and aspirational activity for kids lacing up gloves for the first time, that it doesn’t get made. EVER! But if it does, no doubt I’ll watch it. Its ‘car-crash TV’ after all right? That’s what we love. Its what we pay for!