Saturday from the Convention Center in Pharr, TX Cuban heavyweight Odlanier Solis makes his return to the ring in a twelve round bout for the vacant IBF Inter-Continental title.  Solis was last seen challenging Heavyweight title holder Vitali Klitschko in March of last year.  Solis lost the bout by first round knockout after suffering a leg injury at the end of the opening round. 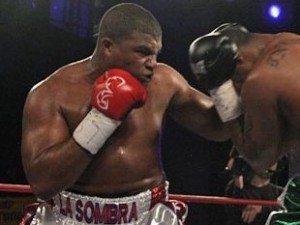 Solis (17-1, 12 KO) was a highly decorated amateur, winning the gold medal at the 2004 Athens Olympics.  In 2006 Solis defected from his native Cuba with two other boxers, including Yuriorkis Gamboa, to have the opportunity to fight as a pro.  Solis started out winning his first seventeen fights, despite often weighing over two hundred and fifty pounds, fifty pounds more than his amateur limit.  Included in the victories were wins over Monte Barrett and Ray Austin.  Solis seemed to have a ton of talent but his out-of-ring dedication was often called into question.

Solis got the opportunity to show his potential when he was selected to face Vitali Klitschko, who along with his brother Wladimir, make up the two-headed heavyweight beast that has long dominated the division.  Solis appeared to take the bout more seriously, entering in far better shape.

At the end of the first round, Solis was hit by a left hook.  He stumbled back and the debate began about whether the damage was caused by a punch or a fluke knee injury.  Either way, the end result was Solis laying on his back with an injury that would cost him the bout and his chance at being champion. The injury would also cost him the last year of his career as he received surgery on the knee and had to rehab.

Solis now makes his return Saturday against Konstantin Airich (23-5-2, 17 KO).  If Solis is a fraction of what he was prior to the injury, he should easily get past Airich, who has made his record against competition that does not come close to the level of Solis.  Airich’s career high-water mark has come in losses to fringe contenders, Danny Williams and Tye Fields.

If Solis can return from the injury and has the dedication to be in shape he could present a talented addition to the heavyweight pool.  He has top level skills and decent power to go along with an outgoing personality that could bring excitement to the division.