Sometimes a fighter’s professional campaign is met with equal measures of success and good fortune, other times a boxer’s plight is marred with enough controversy and tragedy to fill an entire resume. Occasionally in life there is a mixture of all these elements, a successive divergence into two approximately equal divisions. Paul Williams is a man who perhaps at one time was one of the most avoided fighters of his generation and who was feared not only for his imposing size and reach advantages, but also for his extremely voluminous punch output. Willaims notoriously had difficulties with fellow southpaws and his career is highlighted not only by some notable wins but also by some less than stellar occurrences, below we highlight some of those instances as we take an honest look at some of The Punisher’s more memorable moments.

Carlos Quintana 1 & 2: Pechanga Resort & Casino, Temecula, California; Mohegan Sun Casino, Uncasville, Connecticut – With a 7 month spell of inactivity, Williams met with fellow awkward southpaw and 6-to-1 underdog, Carlos Quintana. The long lay-off produced enough ring rust to apparently cause a problem for the South Carolina resident as the Puerto Rican unloaded a bevy of hard and accurate shots, opening twin gashes over the eyes of Williams and sending him for emergency stitches following the unanimous decision loss. Fast forward 4 months and Quintana and Williams would again meet inside the squared circle. This time Williams would forgo his hand at boxing and instead attempt to overwhelm his former conqueror with volume and tenacity. Paul Williams’ vaunted punch output closed the show rather early in their return match, ending matters by way of TKO at the 2:15 mark of the very first round, reclaiming his WBO welterweight title in the process.

Kermit Cintron: Home Depot Center, Carson, California – Williams and Cintron met in May of 2008 and, on paper, the odds of a cracking fight were high as Cintron boasted an excellent knockout percentage and the Punisher was notorious for his ability to keep firing punches from all manor of angles throughout a fight. The match didn’t pan out as planned, however. Puerto Rican, Cintron began well enough, showing balanced footwork and good countering skills, his power was noticeable in the early going even though some would say that Williams was landing the better over-all shots when (in what can only be described as an extremely bizarre moment) just as the action was picking up, an awkward series of events led to the two fighters’ legs being tangled up and somehow, Cintron found himself being jettisoned from the ring and onto the awaiting tables and floor. The fallen fighter was immediately surrounded by medical personnel and an obviously angry Cintron was carried out on a gurney to an awaiting ambulance. The scenario left a bad taste in the mouths of many a fight fan and speculation of a ‘fix’ was high. Paul was awarded a technical decision which some at the time felt was strange, but as it turned out, California’s rule regarding a contest ending before 4 completed rounds of boxing is different than the rest of the country. Nothing really was gleaned for either man in this contest but if anything, fans will remember this match for its follies more than the unfortunate outcome.

Erislandy Lara: Boardwalk Hall, Atlantic City, New Jersey – In a WBO middleweight title eliminator, the number 4 ranked Williams displayed tenacity if nothing else in a contest that many felt was unjustly tilted in his favor. In yet another unfortunate instance of inability to adapt to the situation, Paul Williams ate nearly every hard left hand that southpaw Erislandy Lara (who was unranked by the same organization at the time of the fight) served up. At times it seemed that the former Cuban amateur champion couldn’t miss with his laser-like precision, unloading vicious barrages of punches on the ever-charging South Carolina native. To nearly all TV and ringside observers, this was a landslide victory for the Cuban who sent out a clear message to the rest of the jr. middleweight division with the dominating performance. Somehow, when the judges’ totals were tallied, Williams was the victor by majority decision. Days after the conclusion of the bout, the New Jersey State Athletic Control Board administered a judicial review and subsequently suspended all three judges indefinitely.

Antonio Margarito: Home Depot Center, Carson California – This was indeed a great victory for the Pun 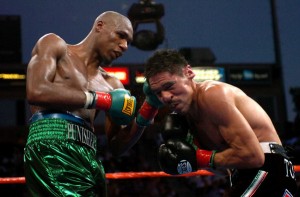 isher. Margarito at this time was a feared welterweight champion making the 8th defense of his WBO title. The Tijuana Tornado was the justifiable pick going into the match at a 6-to-5 favorite over Williams but the Punisher ratcheted up the volume on his already high shot output, averaging over 100 punches per round, smothering the Mexicans’ work on the ropes and in the center of the ring. Margarito fought in his own high pressure style, but on this night he couldn’t keep up with the rangy and determined Williams. Paul secured a unanimous decision victory in a tight battle; press row scores were nearly split down the middle but the judges decision was fair and the Punisher had one of his best career wins.

Sergio Martinez 1 & 2: Boardwalk Hall, Atlantic City, New Jersey – Like it or not, most fans will remember Paul’s career for dubious decisions and one very noticeable loss instead of a list of glorious victories. Williams Martinez 1 was almost universally recognized as one of the best fights of the 2009 calendar year. Both men traded knockdowns in the first round and exchanged brutalities throughout. Williams fought from his usual playbook, throwing at an extremely high clip. However, Martinez’ accurate countering told the story of the fight as he threw nearly 300 less punches than did the gangly Williams, all the while landing at a very comparable measure. The meaningful blows seemed to be coming from the shorter Argentine southpaw while Williams continued the assault, occasionally firing away, seemingly for the sake of keeping busy. Still, the two men battled over 12 action filled rounds. Williams was awarded yet another shady majority decision and one judge, Pierre Benoist (scoring the match apparently with a blindfold made of thousand dollar bills) gave the Punisher the fight with an incredible 119-110 score … Thankfully, the rematch was signed less than one year later and in a very real way, this was a fight that both men needed not only for their own piece of mind but for their respective legacies.

The highly anticipated rematch bore none of the ebb and flow that marked their classic first encounter. For the entire first round it seemed that Sergio knew that Paul would be open to a big counter and Martinez would speed along the process by continuing to walk backwards, coaxing the younger Williams several times to follow his lead. Finally, at just 1:10 of round number 2, an overly aggressive Williams walked face first into a carefully laid trap as Martinez’ plan came together in heart-stopping fashion. With a single left hand, the boxer from Augusta, Georgia was separated from conciousness the moment the punch connected and he plunged face first onto the awaiting canvas. A totally unneccesary 10 count was given as the 6’1″ Williams lay motionless on the floor with his eyes wide open.

The Boxing Tribune wishes Paul Williams a speedy recovery in the personal battle that awaits him.