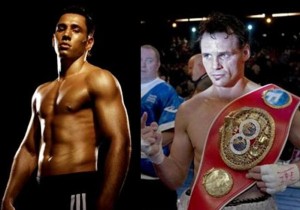 Sturm is looking to make the 13th consecutive successful defense of the title he won from Javier Castillejo in 2007. Sturm is often criticized for his choice of opposition, having never sought to unify his title against another middleweight champion, and for having fought only twice outside of the friendly confines of Germany. After back-to-back controversial decisions against Matthew Macklin (W SD12) and Martin Murray (SD12), Sturm stopped former titleholder, Sebastian Zbik in nine rounds in April.

Geale, a native of Australia who has fought all but one of his professional fights in his home country, will be returning to Germany for the first time since taking the IBF title from Sebastian Sylvester last May. Geale has made two defenses of his title, the first being against Nigerian journeyman Eromosele Albert last August. In his last fight, Geale made a mandatory defense against Ghanaian contender, Osumanu Adama, winning a unanimous decision.