In another age and time the passing of the guard was a major part of the sport of boxing. The cagey old veterans fought the young upstarts – sometimes emerging with a win and sometimes being sent off to retirement. It was the way careers were capped, legacies written, and stars built. Near the end of his career and after he had already dropped the heavyweight title to Ezzard Charles, Joe Louis ended his career against Rocky Marciano, who would go on to beat Jersey Joe Walcott for the heavyweight title after Walcott took the title from Charles. 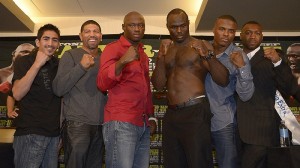 But as the sport evolved and the money took over, the fighters at the top of the sport held on until the very end, often times going for the big money fights against other aged veterans while neglecting the natural passing of the guard to the next generation. It is a problem that many fans and observers complain about, and the lack of bankable stars in the sport can be attributed to it.

When Antonio Tarver and Winky Wright step into the ring on Saturday night at the Home Depot Center in Carson, California to face off against Lateef Kayode and Peter Quillin respectively, they represent a generation of fighters on their way out of the sport, whether they care to admit it or not. Kayode and Quillin are the next generation looking to send the old guys packing while at the same time adding a marketable name to their resumes.

Antonio Tarver is a three-time light heavyweight champion and the former lineal light heavyweight champion. In 2004 he shocked the world when he knocked Roy Jones Jr. out in the second round of a rematch of their controversial first fight, which Jones won by way of majority decision. Tarver was at or near the top of his game from 2002 to 2006, and fought a long list of quality opponents during that time. But since losing to Bernard Hopkins in 2006 “The Magic Man” has been on a significant slide and he has looked anything but magic. He managed wins over fringe contenders Elvir Muriqi and Danny Santiago, as well as former world title holder, Clinton Woods before dropping back-to-back decisions to Chad Dawson. Since the losses to Dawson, Tarver made a move up to the heavyweight division and beat Nagy Aguilera in 2010.

Kayode is only 29 years old, and has been heavily hyped as the next great cruiserweight sensation as he has been brought along on the ShoBox circuit. Kayode is raw and unpolished as a boxer, and he’ll have to hope his aggressiveness and pressure will be enough to overwhelm his 43-year-old opponent. Kayode taking the torch from Tarver is far from a lock, as Tarver’s stoppage win over Danny Green last July showed he still has a bit of fight left in him.

The undercard will feature another “out with the old, in with the new” fight, as former jr. middleweight champion, Ronald “Winky” Wright faces 28-year-old middleweight contender, Peter “Kid Chocolate” Quillin. In his heyday Wright beat a long list of accomplished opponents, most notably were his two wins over Shane Mosley, three wins over Bronco McKart, and his win over Felix Trinidad.

Unfortunately (but fortunately for Quillin) the Winky Wright who befuddled Shane Mosley and Felix Trinidad is long gone. Wright has fought only once in a period spanning nearly five years, and his last victory came against the shell of Ike Quartey in 2006. Since the victory over Quartey, Wright has dropped decisions to Bernard Hopkins and Paul Williams, and has been inactive since 2009.

A victory for Quillin, who has been brought along slowly since his signing with Golden Boy in 2010, likely won’t bring an immediate title shot, but it may bolster his case as he continues to step up in class.

Tarver-Kayode and Wright-Quillin are flawed examples of the system working the way it should. When promoters and networks are willing to pit young, potential stars against wily old veterans, everybody benefits; the young guys get a chance to prove themselves against tested veterans while those tested veterans can stop calling out their respective divisions’ cash cows from the mountain tops and earn their way back to a world title. Had Tarver and Wright been about 4 years younger, these matchups just might have been pay-per-view-worthy.