“Sugar” Shane Mosley announced on Monday that he would walk away from boxing after a career spanning 19 years, five world titles, three weight classes, and countless memorable moments that will likely gain him entrance into the International Boxing Hall of Fame.

“Good Morning everybody Just want to thank you for showing me so much love. Had a great career and loved every moment of it. win,lose or draw [sic],” Mosley would announce on his Twitter account on Monday morning. 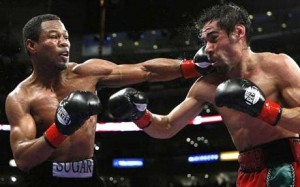 Mosley’s career began in 1993. After losing in the Olympic trials to long-time rival, the late Vernon Forrest, Mosley entered the professional ranks with his father, Jack Mosley in his corner. Mosley would quickly rise up the ranks of the lightweight division and capture the IBF’s version of the title with a unanimous decision win over Philip Holiday only four-and-a-half years after his professional debut.

Mosley held the IBF lightweight title from 1997 to 1999, and won the Boxing Writers Association of America’s Fighter of the Year Award in 1998. He made eight successful title defenses before moving up to the welterweight division in hopes of securing a fight with boxing’s cash cow at the time, Oscar De La Hoya. As a lightweight, Mosley was sometimes regarded as the best of this era, and he bolstered his legacy when he took the WBC welterweight title with a split decision victory over De La Hoya in June of 2000.

Now a star and on the cusp of being a household name, Mosley defended his title three times before he was dominated by Vernon Forrest. Despite being at a stylistic (and height and reach) disadvantage, Mosley exercised the immediate rematch clause, showing the hard-headed determination and refusal to back down that he was known for. Mosley lost the rematch to Forrest six months later before moving up to the jr. middleweight division for a tune up fight with Raul Marquez that would lead to a big-money rematch with De La Hoya.

Mosley would win a closer, controversial unanimous decision in the rematch with De La Hoya, and his win would later be tarnished when it was revealed that he had testified in the grand jury trial of BALCO and its former founder, Victor Conte, and used “the clear” and “the cream” – two undetectable steroids – in his training camp for the fight.

Mosley wouldn’t capitalize on the victory with a third fight with De La Hoya, instead making his first defense against then-IBF jr. middleweight titlist, Ronald “Winky” Wright. As was the case with Vernon Forrest just two years prior, Mosley would drop back-to-back decisions to Wright. Unable to crack Wright’s famed defensive posture, Mosley was unable to mount any consistent offense as Wright racked up points when countering on Mosley’s openings.

Mosley bounced back with five straight wins, two coming by way of TKO against former jr. middleweight champion Fernando Vargas. But rather than stay and campaign as a jr. middleweight, Mosley would spend the remainder of his career shuttling between 154 and 147 pounds.

In 2007 Mosley was out-boxed by Miguel Cotto for the majority of the early part of their fight, but he clawed his way back into the fight over the last three rounds, forcing Cotto into retreat. It was too little, too late in the end, however, as Mosley wound up on the losing end of a close unanimous decision.

When Mosley returned ten months later against Ricardo Mayorga he looked and rusty and out of sync, struggling his way to a literal last-second knockout victory over the wild slugger from Nicaragua. He went into his January 2009 fight with WBA welterweight titlist Antonio Margarito as a heavy underdog, but after new trainer Naazim Richardson found loaded knuckle pads inserted in the handwraps of Margarito, Mosley would launch a cold, calculated assault and stop Margarito in the ninth round in front of a packed hometown crowd at the Staples Center.

Again unable to capitalize on a huge career win, Mosley sat out for sixteen months before losing a near-shutout decision to Floyd Mayweather in May of 2010. Mosley had his moment to shine in the second round, nearly flooring Mayweather with a thunderous right hand, but he was unable to do any further damage. Mosley would tire over the course of the fight, and finish in a timid retreat as Mayweather pot-shotted his way to victory.

Mosley would battle to a split draw with Sergio Mora four months later before losing another near-shutout to Manny Pacquiao in May of 2011. And nearly one year after the disheartening loss to Pacquiao, Mosley was beaten from pillar to post by WBC jr. middleweight titlist, Saul “Canelo” Alvarez for a 12-round unanimous decision loss.

After his May 5 loss to 21-year-old Alvarez it was clear the “Sugar” Shane Mosley of days past was no more. Gone was the fierce right hand that carried him to 32 knockout wins in his first 34 fights. Gone were the bad intentions of his left hook to the body. All that remained was a shell of the former champion with nothing left to give in the ring.

Mosley leaves the sport having come full circle. Having come into boxing trained by his father and winning five world titles in three divisions, Mosley walks away with plans of guiding his son, 21-year-old amateur Shane Mosley Jr, to the same success.

Mosley finishes his career with a record of 46-8-1, with 39 knockouts.