Here they go again.  Main Events and NBC will again attempt to capture the hardcore and casual boxing audience with the fourth installment of the Fight Night series on NBC Sports this Saturday.  They are thinking big with this one, literally, with a main event that features two of the best available heavyweights not named Klitschko.  Tomasz Adamek will defend his home turf at the Prudential Center in Newark, NJ against the slick Eddie Chambers in a battle of proven heavyweight contenders in the featured ten round bout of the evening. 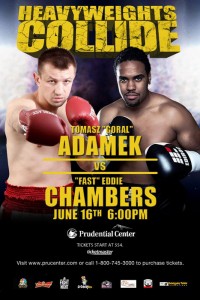 Since the formulation of the Fight Night series the mission has been to put together fights that produce action packed bouts that are evenly matched.  Both televised bouts should do exactly that.  Chambers and Adamek make for an interesting style match up of heavyweights that are evenly matched in size but produce a contrast in style  The tough brawler with underrated skills Adamek will take on the speedy and crafty Chambers for an opportunity towards future big heavyweight fights.  Meanwhile in the co-main event fast rising heavyweight Bryant Jennings will again go out on a limb in his young career when he meets the Steve Collins in a ten round heavyweight affair.

Adamek and Chambers have traveled similar paths to this bout.  Both have made their name in the heavyweight division only to be taken down by a Klitschko in their attempt at obtaining heavyweight glory.

Chambers (36-2, 18 KO) owns wins over Calvin Brock, former champ Samuel Peter, and Alexander Dimitrenko.  He lost a point’s decision to Alexander Povetkin in his first loss.  After rebounding from that experience he earned a shot against Wladimir Klitschko in 2010.  The talented Chambers had the tools but lacked the size to challenge the behemoth Klitschko.  He was dominated over twelve rounds and then brutally stopped with seconds left in the final round.  Chambers was game as he even sumo slammed Waldimir to the ground in round one to make a point, but he simply was not able to cope with the size, skill, and power of the champ.

Adamek (45-2, 28 KO) has won titles at light heavyweight and was the unified Cruiserweight champ.  He has wins over Paul Briggs, Steve Cunningham, Andrew Golota, and Chris Arreola.  He suffered his first defeat to Chad Dawson by decision in a light heavyweight bout back in 2007.  Adamek’s second loss came in a spirited but fruitless challenge to giant heavyweight champ Vitali Klitschko when he was stopped in the tenth round in late 2011.  Like Chambers, Adamek was also game for the Klitchko shot.  He absorbed an absurd amount of punishment while continually trying to mount his attack and was finally saved from his own heart when it was mercifully stopped.

Now the two talented heavyweight contenders look to re-establish themselves when they meet this weekend.  Both have designs on still pursuing heavyweight glory.  A win this weekend will put them in a place to continue gaining attention for big fights.  The matchup bodes well for fans as it presents two fast big men willing to produce action.

Both boxers bring talent and skill to the fight that has been developed over years of training and experience.  Chambers, who is originally from Pittsburgh, but has spent his boxing career in Philadelphia, has learned all the subtle skills that make for a true Philly fighter.  He has the slick ability to stand in front of someone landing punches while slipping his opponents shots.  Chambers is also one of the most intelligent ring technicians of the day capable of mentally taking his opponent’s desire to fight by dictating the pace and direction of the fight.

Adamek is a little more brute in his attack, but his boxing skills have been highly underrated.  He has always been given credit for being strong and having a rock solid chin.  What observers often fail to realize is the improvement he has made over the years in his technique.  Under the tutelage of trainer Roger Bloodworth, Adamek has learned to use the jab to set up his attack.  He employs a smart pressure style of fighting that breaks his opponents physically and mentally over the course of a fight.

Both fighters are not shy about mixing it up the ring.  Chambers is more likely to do so by landing shots while making his opponent miss.  Adamek has improved his defense, but when push comes to shove he will always be a warrior perfectly willing to eat a few punches to land his own.

The willingness to fight should be to the delight of the packed and partisan crowd that will fill the Prudential Center in North Jersey next Saturday.  The Fight Night series showed in their last outing from Bethlehem the importance of a lively crowd.  When Puerto Rican Bethlehem native Ronald Cruz entered the arena and won a unanimous decision last Friday night the hometown crowd erupted making for a wild environment live and on TV.  The crowd continued their rabid support in the main event when Philadelphia Puerto Rican Gabe Rosado stopped Sechew Powell in round nine.

The event showed the difference between a fight with interested followers in the arena who have a rooting interest and what that does for night’s action.  The energy in the building was electric and carried over into the ring.  While the sellout crowd of nearly two thousand in the Sands was dramatic, the far larger crowd that will show for this fight will bring things to another level.

Chambers will have plenty of the Philly faithful.  The city has a long and proud history of great boxing that will certainly make the two hour trek to Newark to support Chambers.  On the other side will be Adamek’s Polish faithful that have packed the Prudential numerous times waving flags, sporting scarves, and making noise like a European soccer game.  The electricity should certainly carry into the ring for an exciting battle.

Evenly matched heavyweights, speed, skill, and a raucous crowd should all be present for the fourth edition of Fight Night.  While nothing in boxing is guaranteed, on paper this looks to be a good one.

Adding to the card will be rising Philadelphia heavyweight Bryant Jennings (13-0, 6 KO) taking on Steve Collins (25-1-1, 18 KO) in the televised co-feature.  Jennings has been on two previous Fight Night cards defeating fellow prospect Maurice Byarm and stopping former champion Sergei Liakhovich.  Collins has fought his entire career in Texas and the Midwest and this will be his first bout against a top level opponent.