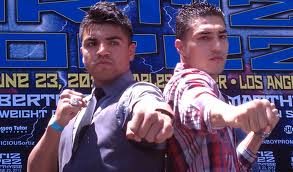 Ortiz has remained out of action since last September’s knockout loss to Floyd Mayweather Jr., in which Ortiz was deducted a point for intentional headbutts in the fourth round before being knocked out while he tried to repeatedly apologize. Prior to the knockout loss to Mayweather, Ortiz won the WBC welterweight title in an all action 12-round brawl with Andre Berto. Both men traded knockdowns throughout the fight, but Ortiz outworked Berto in the late rounds to earn the victory. Ortiz was scheduled to face Berto in a rematch in February before an arm injury forced a postponement. After the fight was re-scheduled for June, Berto tested positive for trace amounts (consistent with contamination) of the banned substance, Nandrolone and the fight was canceled.

Josesito Lopez steps into the fight with Ortiz on relative short notice and looking to play spoiler to Ortiz’s plans of a September title fight with Saul “Canelo” Alvarez. Lopez has been a frequenter of EPSN’s Friday Night Fights series, and his KO7 win over Mike Dallas Jr. last January paved the way for his appearance on the undercard of Mayweather vs. Ortiz against Jesse Vargas last September. After turning in a solid performance – and winning the fight on one judge’s scorecard, as well as in the eyes of many observers – Lopez came out on the wrong end of a split decision. Like Ortiz, Lopez has remained out of action since last September.