Later this week, Cornelius Bundrage (31-4, 18 KOs) makes his second defense of the IBF junior middleweight title against Cory Spinks (39-6, 11 KOs), from whom “K-9” won the title in August of 2010. For Bundrage, this will continue a long and illustrious career of taking the path of least resistance to a world title and still making an awful hash of things along the way. Knockout losses to Sechew Powell (in 2005) and Joel Julio (in 2007) and decision defeats at the hands of a 149-pound Steve Forbes (fighting 19 pounds above the weight at which he was a world champion, on the Contender reality series) and Grady Brewer (another Contender alum) suggest a guy who ought to be right on the outer fringes of the top twenty or even top thirty, not a world titleholder. By any appreciable metric, he is a paper champion. 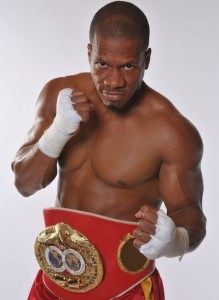 Your columnist has railed against paper champions before (see “The People Vs. Paper Champions”, from May 30). Perhaps, however, a revisit of this idea is in order. With Lucian Bute’s recent loss at the hands of Carl Froch and Randall Bailey’s unlikely return to prominence at 147 pounds, not to mention Alexander Povetkin’s holding of the remora to the Klitschko brothers’ Great White Shark at heavyweight (the WBA “regular” belt), some sense needs to be made out of what these “world titles” do for the fighters.

The most immediately obvious benefit is that a world title still holds some value from a marketing standpoint. Would Cornelius Bundrage be anything other than an occasional Friday Night Fights participant without the IBF strap? He’s basically Grady Brewer with better boxing ability, the kind of fighter who any up-and-coming 154-pounder would duck if not for the tantalizing shot at a world championship. The difference between $15,000 and $100,000 is strapped around Bundrage’s waist and has the letters “IBF” on it.

In addition, there’s a measure of credibility in a title belt if that belt is held in the proper context. At heavyweight, the question stopped being “who’s the best fighter over 200 pounds” a long time ago, around the time Wladimir Klitschko truly became Wladimir Klitschko. But when sorting the Tony Thompsons and Chris Arreolas and Alexander Povetkins of the world out, the WBA has essentially provided a prize for which the men on that level can fight, since the Klitschko brothers can only beat so many of those guys up at a time and a man’s gotta eat. Giving that heavyweight sideshow a belt of its own and essentially marketing it as “best heavyweight not named Klitschko” at least provides a TV narrative and something for casual fans to wrap their minds around.

Plus, there’s the example of Lucian Bute to consider. A lot of boxing media people (your columnist included) got suckered into the idea that Bute was the Masked Man, the outsider who beat up everyone put in front of him, using that IBF belt as leverage in order to build his record in 12-round fights while waiting for one of the big boys from the Showtime Super Six circus to pay attention and give him a chance to show what he’s got. Never mind that’s ultimately the biggest contributing factor in why Bute got the snot beaten out of him by Carl Froch. The point is that Lucian Bute was able to get decent paychecks while building a case for the big-money fight he got in Nottingham, which, at the last, benefited him financially.

Look at Randall Bailey. Mike Jones, the alleged “next big thing” at welterweight, hoped to use the IBF (and what’s with those guys always seeming to enter into this?) strap to bolster his own claim to an eventual passing-of-the-torch bout with Manny Pacquiao. Amid the Timothy Bradley judging nonsense and the Bob Arum conspiracy theories from that night of pay-per-view pugilism, we forget that a guy who couldn’t even wrest a 140-pound belt from Juan Urango, who got starched by Herman Ngoudjo in 2007, who last had a world title belt (the WBO 140 strap) around his waist in 2000, and who turns 38 in September just raised his purse ceiling from tens of thousands to hundreds. Welterweight is a crowded house, and a welterweight title belt is valuable. Bailey knows that, and he will be able to command a fine premium to fight just about anyone at 147 pounds. He could try to hold the belt for a run as a paper champion, or considering his age he could get one final huge payday against a guy like Andre Berto or even Manny Pacquiao before riding off into the sunset with more money than he ever thought he’d make in the Sweet Science.

So for all of this space’s ranting about paper champs (and Beibut Shumenov, you are still not off the hook), perhaps as we watch Cornelius Bundrage this Saturday night it would behoove us to remember that those belts have value to the most important people in boxing, the guys we should be celebrating; the fighters themselves.

Fox Doucette covers Friday Night Fights for The Boxing Tribune. His weekly column, The Southpaw, appears on Thursdays. Fan mail, hate mail, and a better way to explain sanctioning bodies to non-boxing fans (because it’s an exercise in confused looks!) can be sent to beatcap@gmail.com.