There’s a mismatch on the cards when Cornelius Bundrage, the IBF light-middleweight titleholder defends his crown against the man he won it from, Cory Spinks, at the Fantasy Springs Casino in Indio, California Saturday night. 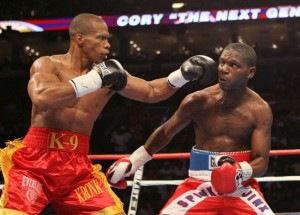 Bundrage, 31-4, 18 KO’s, has bloomed late in life and at 39 years of age is the up and comer, whereas Spinks is considered a spent force at 34. Largely that view refers back to August of 2010, when Bundrage all but disemboweled Spinks over five brutal rounds, forcing a stoppage to annex the IBF title.

Make no mistake, Spinks has earned his spurs. The son of Leon, and nephew of Michael, could be said to have equaled, if not surpassed the achievements of his illustrious forebears. In compiling a 39-6, 11 KO record Cory has amassed four world titles across two weight divisions, and narrowly failed to scale a third (a split decision loss to Jermain Taylor in 2007 up at 160 pounds). However, his two wins since the Bundrage mauling do not disguise the fact that Spinks is on a downward spiral – and the intervening two years will have further diminished his prospects of overturning the first result.

Bundrage has declared himself a free agent in the run up to the fight, and says he’s leaving Don King to look for bigger fights, so that Golden Boy have picked up the Bundrage-Spinks promotion and will be looking to push the IBF champion’s claims in a division now dominated by marquee fighters like Mayweather, Cotto and Alvarez.

Since taking the title, Bundrage has defended once – a comfortable points verdict over Sechew Powell to revenge a first round knockout loss way back in 2005 – and it’s hard to see how Spinks can bring anything new to the table that will alter the course of events set in train two years ago, so that I see Bundrage stopping the former champ early, perhaps inside the five rounds he managed first time round.

Russell, of course, is being groomed for stardom and will be expected to handle Perez, who’s fighting style justifies his nickname. Perez has all the skills to give Russell problems, however, and it may be that the 24 year old American will have to go the long route to emerge a winner – which he should do.

Lara has made good use of a sterling amateur career to rise through the professional ranks, his only setback being a points loss to Paul Williams, a fight he might have taken a little early. Lara got firmly back on track this April when he blew Ronald Hearns away in a mere 94 seconds, and he’ll expect Hernandez to be his next victim, even if the veteran Mexican will provide stiff opposition. Hernandez has boxed four former world champions in his last four outings, and beaten three of them, and he’ll not be easy to overcome. The 29-year-old Lara is the favourite to prevail, but again may have to do so over the full ten round distance.