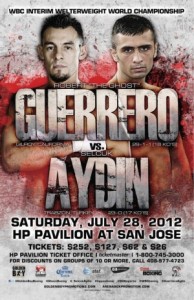 The body work of Aydin began to take its toll on Guerrero in the fifth round, as his output significantly decreased. Guerrero, despite the decrease in activity, was able to stifle Aydin with nimble lateral movement after his combinations, keeping Aydin turning and searching.

Guerrero found himself lingering too long in the pocket, allowing Aydin to land several uppercuts in the eighth round. The uppercut proved to be an effective weapon in the late rounds, as Aydin was able to snap Guerrero’s head back and stun him several times. A combination of body punching and the uppercut may have momentarily hurt Guerrero in the tenth round, forcing him to tie Aydin up to stem the tide.

The championship rounds proved to be just as exciting as the first ten, as Aydin walked a fatigued Robert Guerrero down while looking for the home run. Guerrero, while fighting in retreat, let his hands go to take the round as the San Jose crowd chanted “Robert! Robert!”

Robert Guerrero wins his welterweight debut after skipping over the jr. welterweight division, and takes home the WBC’s Interim belt, becoming the mandatory challenger to Floyd Mayweather, if you choose to believe the WBC will enforce that mandatory.

In the opening bout of Showtime’s live television coverage, Alfonso Gomez was just a step behind from the opening bell, as Shawn Porter landed the sharper, more powerful punches in the fight. Accidental head butts opened cuts over Porter’s right eye in the first round and a mile wide cut over his left eye in the ninth.

Gomez was just a step behind Porter from the outset, as he landed his right hand with relative ease. Each time Porter was able to land his own right hands in return. Porter put some distance between Gomez and himself in the fourth round, when he trapped Gomez against the ropes and unloaded several unanswered head and body shots, forcing Gomez into a shell. Gomez fought back, landing a few hard body shots of his own before the end of the round.