Main Events has added a jr. middleweight title eliminator to its next Fight Night card on September 21 matching emerging Philadelphia fighter Gabe Rosado (20-5, 12 KO) against Cayman Islands native Charles Whitaker (38-12-2, 23 KO).  The card will be held at Sands Casino in Bethlehem, PA where Main Events previously hosted a successful card earlier this year.  Rosado scored a knockout of Sechew Powell in the main event of that first Fight Night in Bethlehem. 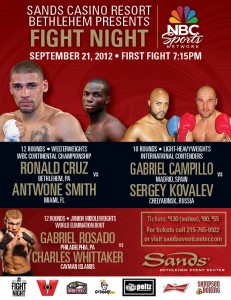 Headlining the card is tough-luck light heavyweight Gabriel Campillo (21-4-1, 8 KO) taking on Sergey Kovalev (18-0-1, 16 KO) in a ten round bout.  Also on the televised portion of the card Bethlehem native and rising welterweight contender Ronald Cruz (17-0, 12 KO) takes on veteran Antwone Smith (21-4-1, 12 KO) in a twelve round bout.

Rosado has come to the attention of the boxing world with big performances on the Fight Night stage.  On the opening card in January from the Arena in Philadelphia, Rosado became the first to stop Jesus Soto-Karass with a dominant fifth round knockout.  Then Rosado battled some early difficulties with the crafty southpaw Powell to produce a definitive ninth round knockout in June.

Rosado suffered some defeats earlier in his career but has shown that a fighter can grow from losses and build into a dangerous contender.  He suffered five losses in his first nineteen fights but this resulted in a fighter who gained valuable experience.  In those nineteen fights Rosado had losses to Alfredo Angulo and Fernando Guerrero while getting wins over Kassim Ouma and Latif Mundy.

Since his last defeat Rosado is riding a six fight win streak, including his wins over Jesus Soto-Karass and Sechew Powell on Fight Night. Rosado has had difficulties getting the top 154 pounders into the ring but with this bout he positions himself to be the mandatory challenger to IBF champ Cornelius Bundrage.

Whitaker is an experienced veteran who is looking for a shot at a title in this his last run at thirty eight years of age.  Whitaker’s most notable bout is a third round KO loss to Mikkel Kessler back in 2000 which was part of a five bout losing streak.  Whitaker last suffered defeat in 2004 to Troy Rowland and since that time has won fourteen straight fights including a decision win over Giorbis Barthelemy in November last year to position himself as the number two IBF contender.

The Fight Night card will be broadcast on NBC Sports at 9pm with all three bouts listed above televised.  The card will be live from the Sands Casino in Bethlehem which was sold out for the last Fight Night card largely to support hometown fighter Ronald Cruz.  Main Events recently had the Fight Night contract extended with NBC into 2014 including a daytime event on NBC’s main network next year.