Cuban featherweight Yuriorkis “El Ciclon de Guantanamo” Gamboa (21-0, 16 KOs) will make his return after more than a year on the shelf when he challenges IBF featherweight champion, Juan Carlos Salgado (26-1-1, 16 KOs), who retained his title with a 12-round unanimous decision victory over Jonathan Victor Barros on Saturday night. Super middleweight contender Andre “The Matrix” Dirrell (20-1, 14 KOs) will reportedly challenge Brian Magee (36-4-1, 25 KOs) in the co-feature bout of the night, in the first card promoted by neophyte promoter, 50 Cent and Floyd Mayweather’s TMT Promotions. 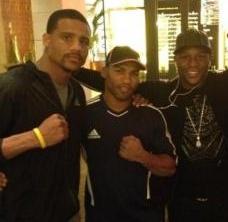 Gamboa was last seen scoring a technical decision win over Daniel Ponce De Leon last September. The former WBA and IBF featherweight champion has never lost a professional fight, but both of his titles were relinquished on the scales in back-to-back fights.

Andre Dirrell has been mostly inactive since his April 2010 disqualification win over Arthur Abraham. Dirrell, who was leading on all scorecards at the time of the disqualification, surprised many viewers when he was able to outbox and befuddle Abraham for eleven rounds. A slip on a wet spot in Abraham’s corner forced Dirrell to his knees, where Abraham hit him with a sweeping right hook while he was down, knocking him out but losing the fight. Dirrell returned last December, scoring a second-round stoppage of Darryl Cunningham.

Details on the venue and network have not yet been finalized.