There’ll be few more anticipated contests in the coming season than this weekend’s all-British affair between Ricky Burns and Kevin Mitchell.

Burns will be making the second defence of his WBO lightweight title (proper), but this is one of those sporting occasions where the baubles on offer are less important than the sport itself – pitching as it does two of Britain’s most accomplished pound-for-pound fighters against each other at the peaks of their respective careers. 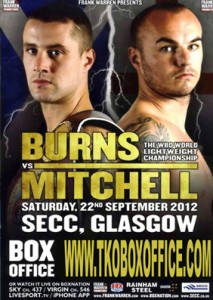 Burns, 34-2, 9 KO’s has the finer resume – the former WBO super-featherweight champion, with three defences under his belt – but Mitchell, 33-1, 24 KO’s arguably enjoys loftier respect amongst his peers, despite a debilitating loss to Michael Katsidis two years ago and a reputation for succumbing to erratic fight preparations and out-of-the-ring distractions.

There’s no doubt that Mitchell has all the tools, and when he’s on song he’s a formidable fighter. Formliners may point to the fact that Burns handily outpointed the same Katsidis who had a year previously bombed Mitchell out in less than four rounds – but they fail to account for the Londoner’s chaotic personal life which undoubtedly derailed his training camp in the lead up to the fight, and affected his performance between the ropes, which was, by his own admission, abject. For a more accurate view of Kevin’s abilities, wind forward a year to Mitchell’s domestic clash with strongman John Murray, to which Mitchell brought every bit of his “A” game and thoroughly out-boxed his world-class opponent before administering the coup-de-grace in the eighth round.

This is not to belittle the fistic achievements of Scotsman Ricky Burns. There were those of us who felt 29-year-old Ricky had found his level when he was soundly outpointed by Carl Johanneson in an abortive assault on the British super-featherweight title back in 2007, but since that reversal Burns has reeled off an astonishing twenty successive wins and gathered up two world titles in the process. His shock defeat of highly-touted super feather champion Roman Martinez two years ago catapulted the Scotsman into world class and he’s gone about justifying that position since with skill and grace.

It may be significant that Burns will be on home turf at the Scottish Exhibition Centre in Glasgow – and 27-year-old Mitchell will face a hostile atmosphere, even if he’s claiming that he has three thousand of his own people traveling north to back him. A more sober assessment would have it that both fighters are long enough in the tooth, and well enough traveled, to not allow crowd distractions to get in their way.

Pre-fight, both men have been a credit to themselves and their sport. Avowedly friends of some years standing, they’ve eschewed the current proforma of puerile insults and pointless barnstorming, and have gone out of their way to point up each other’s strengths and downplay weaknesses, and yet have still been able to promise a punch up to remember. Interest in the fight does not appear to have suffered because neither fighter has claimed to want to dismember the other, or members of their immediate family. At their recent “Face Off”, both boxers smiled and happily shook hands, expressed their mutual affection, and then vowed to beat the living crap out of each other. Good times.

This is a tough fight to call – and much will depend on which Kevin Mitchell steps between the ropes. If he’s in Murray-type form I can see him ekeing out a thin decision over the twelve rounds, but if I were a gambling man I’d have to favour any decision going to the Scotsman in front of his own supporters.

Chief interest in the undercard sits with the come-backing Scott Harrison, who has his second return fight after a seven year enforced lay-off. Harrison’s problems have been well documented so we shan’t repeat them here, but the 35-year- old looked lean and hungry back in June when he stopped unbeaten but outgunned youngster Gyorgy Mizsei Jnr in four rounds. Harrison’s opponent hasn’t yet been named, but he looked so good in that last contest that already the financiers are dreaming up an all-Scottish tear up between him and Burns, should the latter succeed in turning back Mitchell. It’s probable that Harrison, who held the WBO featherweight title for three years and ten defences in the early 2000’s, will need a couple more tune-ups before sharing a ring with the world champion, but if he is able to continue looking the part there’s a huge payday awaiting the pair of them somewhere down the road.