Omar Narvaez will look to extend his reign as WBO world super flyweight champion when he meets Mexican Johnny Garcia in Argentina this Wednesday.

Narvaez (36-1-2, 19 KOs), a two division titlist, has held both the WBO flyweight and super flyweight belts. His run as super-fly champion was recently put on hold, when he took a small jump up in weight and huge jump up in competition to face Nonito Donaire in New York last October for the WBO and WBC bantamweight straps. It was a lackluster performance for Narvaez, who had traveled so far north in hopes of getting himself wider exposure and a larger fan base. The exposure lasted 12 rounds, and after a one-sided decision loss (Narvaez’s first), he was on plane back to Argentina. 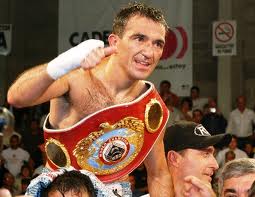 Returning to more familiar grounds, Narvaez would again defend his WBO super flyweight belt via one-sided 12 round decision over Jose Cabrera. Now, he looks to extend his reign as champion when he meets a younger but less experienced Johnny Garcia (16-3-1, 8 KOs).

While Garcia has the advantage in age (23 years as opposed to Narvaez 37), he lacks in experience having only half the professional bouts of Narvaez, and has the disadvantage of fighting on Narvaez’s home turf in his first bout outside Mexico. It’s also his first time competing for a world title and has been nearly two years since he’s went the 12 round distance– His last two bouts being eight round decision wins, whereas Narvaez has went 10 rounds or better in his last 10 outings.