Friday Night at the Fantasy Springs Casino in Indio, California, undefeated featherweight Gary Russell Jr. (20-0, 12 KO’s) will look to keep his undefeated record in tact when he meets Mexico’s Roberto Castaneda (20-2-1, 15 KO’s). The scheduled 10 rounder will be the main event on Golden Boy Promotions “Night of the Olympians” card, which also features five of the United States 2012 Olympic boxers making their professional debuts. 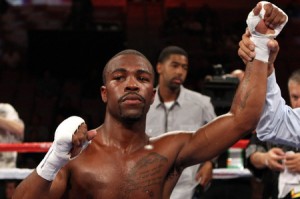 Russell, a 2008 U.S. Olympian, was originally slated to meet Russian Vyacheslav Gusev (20-2, 5 KO’s) in the main event but Gusev, the WBO European and PABA featherweight champion, suffered a broken rib and Castaneda stepped in to replace him. Castaneda’s last outing was a sixth round stoppage to Christopher Martin in June, his other loss being a fifth round stoppage in January of this year. For Russell this is only his second fight of 2012, a substantial drop in activity as he’s fought at least six times a year since taking to the pro ranks in 2009.

The under card will feature five of Al Haymon’s U.S. Olympians. After a disappointing performance by the U.S. team in the London games, the fighters will be looking to make a big statement on Friday. The participating fighters are as follows:

Rau’shee Warren, bantamweight
Warren is the only American boxer to make the Olympics three times, though he failed to medal. He was a gold medalist in the 2007 World Amateur Championships and 2010 U.S. Nationals, a bronze medalist in the 2011 AIBA World Championships, and he’s fought for the L.A. Matadors in the World Series of Boxing in the 2010-2011 and 2011-2012 seasons, winning a gold medal in the 2011 individual competition. He went 8-0 in World Series of Boxing competition. Warren is set to meet Luis Rivera (1-2).

Errol Spence Jr., welterweight
Spence is a 2009, 2010, and 2011 U.S. National champion in the welterweight division and was ranked the number amateur boxer among U.S. welterweights. He made the quarterfinals in the 2012 London games, but lost by decision. He faces Jonathan Garcia (3-3, 1 KO).

“Night of the Olympians” will be broadcast live on Showtime. “ShoBox: The New Generation” begins at 10pm EST Friday, November 9th.